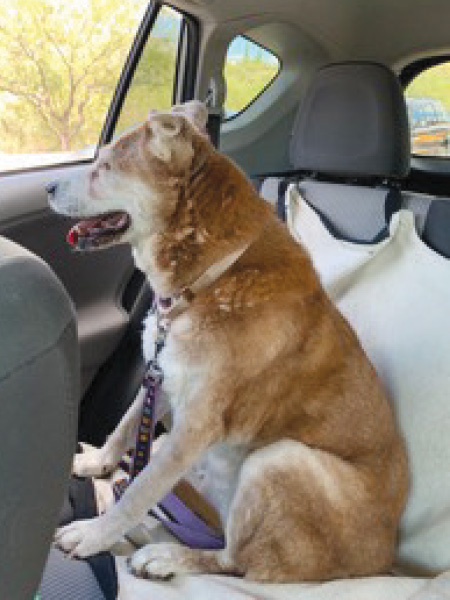 November is the month to recognize beloved pets adopted as seniors like Sadie, a gentle dog adopted at age sixteen by the Newton/Mong family. Kathie Newton is no stranger to animal rescue, either, having adopted several pets of all ages. Despite both of her children being away at college, Kathie’s home is still quite full. Kathie and her wife, Tracy Mong care for two cats, two dogs and one rabbit. Sadie is the oldest at eighteen now and is still going strong! In the two years that the family has had Sadie, she has endured many medical issues, all of which she has miraculously overcome. The Newton/Mong household is a busy one, but it has certainly been a perfect fit for Sadie.

Kathie came across Sadie in the same way she found many of her other pets: through a friend. Thanks to this friend’s connections to In the Arms of Angels pet rescue and other animal welfare groups, she was able to find Sadie and connect her to Kathie. Sadie was in need of a new home after her previous owner was incapacitated. Fearing that a dog of Sadie’s age would have difficulty attracting the attention of adopters looking for a long-term pet, Kathie was sympathetic. She also knew that her other pets were docile enough to comfort and tolerate Sadie given any special needs she may have. Bearing this in mind, she took Sadie in for a trial and hasn’t looked back since.

Sadie is quite a unique dog. Besides being a mix of many breeds, she also sports several extra toes and appears bow-legged when she walks. She has had more than her fair share of health issues, too. Blocked ducts and cataracts in her eyes resulted in her needing eye drops twice daily. Plus, she had significant infections in her ears, nose and throat along with tumors and dental problems when her family first adopted her. However, after getting her nasal passage flushed and twenty teeth pulled, she felt like a new dog! The vet was amazed by how rapidly Sadie’s condition improved. Her energy levels surged and overall health increased. Since then, Sadie has been known to overcome other health problems and adjust to minor setbacks as they come.

Sadie shares her home with a number of younger pets. Kathie adopted the rabbit at her daughter Becca’s request when she was seven or eight. Remarkably, the rabbit is still thriving over twelve years later. There are also two cats which frequently spark Sadie’s attention, but not enough for her to successfully chase them down. Besides them, there is Jackson, the only other dog. Jackson is ten years old and constantly curious about Sadie and her various needs. He has been known to sniff her cautiously after she has had her eye drops, for example, always making sure she is alright. Cora, the family’s well-loved chow mix recently passed away, leaving Sadie to progressively assume her role as a leader to Jackson. When Kathie first adopted her, Sadie seemed fairly anxious and confused about the new environment. She had cataracts and was nearly entirely deaf already. So, navigating her new home with other pets proved to be quite the learning curve. She adapted quickly, though. Now, Sadie affectionately follows Kathie around the house and enjoys her favorite treat: popcorn! With her age came stiff joints, but they never stopped Sadie. She loves to spend her time sleeping and slowly moseying her way around the house rather than going on extensive walks in the hills of Tucson. Much to the Newtons’ surprise, however, Sadie still manages to jump onto the couch of her own accord and instantly locate and swallow any crumbs or dropped table scraps. “She’s very food driven,” Kathie says. ”She once swallowed an avocado pit whole since she has too few teeth to chew!” Undoubtedly, this senior dog has made herself perfectly at home with her family.

In the end, Sadie has proved to fit in excellently at her home with Kathie and Tracy, just as many senior pets do when they find a forever family. Despite the potential for medical issues and limitations in mobility, senior animals are
full of personality. It can be emotionally difficult to take in a new family member so far along in its life. But, as Sadie proves, age does not hinder the love and memories an animal can provide. This November, spend National Adopt a Senior Pet Month appreciating the senior four legged friends already in your life or even visit a local shelter or animal rescue group to make an affectionate addition to your family.