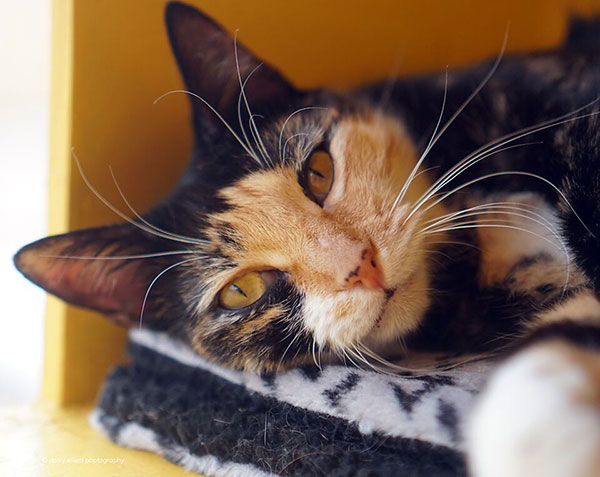 An FIV-positive cat makes a transformation and finds her forever home after 1,405 days in the shelter.

Amid the coronavirus pandemic of the last few months, many people have expressed feeling like they’ve been stuck at home forever. But one lucky cat at the Hermitage No-Kill Cat Shelter found her forever home for the first time.

Titania, a 6-year-old calico, was adopted on
May 14, 2020, after 1,405 days in the shelter. Karina Levine, the volunteer coordinator at Hermitage, said when Titania came to the shelter in July 2016 after being surrendered by her owner, she was a difficult case. She was beautiful, yes, with dappled fur and markings around her eyes that look like natural eyeliner. But she was very uneasy around people and in the open rooms of the Hermitage’s cageless shelter.

The volunteers at the Hermitage include people who specialize in socializing the animals. Several of them set out on a mission to bring Titania around to the idea of humans and affection.

“Shorty after we moved into the new building [in October 2017] she decided to change her mind about humans,” Levine says. “It was like one day, she decided, ‘Oh, humans aren’t so bad. I guess I could get some love. All these other cats are getting love and they seem to enjoy it.’ It was like a completely different cat – like night and day.”

Now Titania had the friendly personality to match her gorgeous looks, but there was one more complication: feline immunodeficiency virus, or FIV. This disease weakens the immune system, making cats more susceptible to infection. Though FIV-positive cats can certainly live long and healthy lives, hearing about the diagnosis sometimes deters adopters.
However, this spring was a perfect storm.

In March, the Hermitage featured Titania on its Facebook page, accompanying a video of her with a caption including “This sweet girl is proof that with love, patience, compassion, and again patience, the most fractious kitties – and believe me, she was very fractious her first couple of years here – can become some of the most loving kitties!”

Then, in May, the shelter staff decided to integrate their FIV-positive population with the general population of cats at the shelter, as it’s only transferred through deep bite wounds. The Hermitage has historically kept kitties in separate rooms based on their conditions: one for diabetic cats, one for seniors, one for kittens, one for the general population. Now, the FIV-positive cats are seen by more people, and 14 FIV-positive kitties have been adopted since the integration. Additionally, the shelter saw an uptick in adoption applications during stay-at-home orders, with people stuck indoors and looking for a new pet to cuddle. They also lowered adoption prices.

When a woman came to visit the shelter and stroll through the room with general population and FIV-positive kitties, Titania started following her around, and the woman fell in love. She took Titania home, where she lives with her older sibling – a German shepherd. Titania’s new mother reported to Levine that Titania hasn’t just settled in well, but has become the ruler of the house.

She is dearly missed by her old friends at The Hermitage. Levine fondly recalls trying to bring a young kitten Titania out of her shell, by telling her that the two of them would be best friends one day.

Many of the long-term vol-unteers, who had a chance to watch Titania blossom from a “scaredy cat” to an affectionate cuddler, agreed that it was bittersweet to watch her find a new home.

“Titania is one of the most beautiful cats I’ve ever known,” says Keeley Shaughnessy, a volunteer at the shelter who first met Titania in January 2019. “Not just physical beauty, but an inner beauty that allowed her to grow from an extremely cautious shelter cat to one who welcomed human attention.”

To learn more about adopting a cat from The Hermitage or working as a volunteer, visit hermitagecatshelter.org.