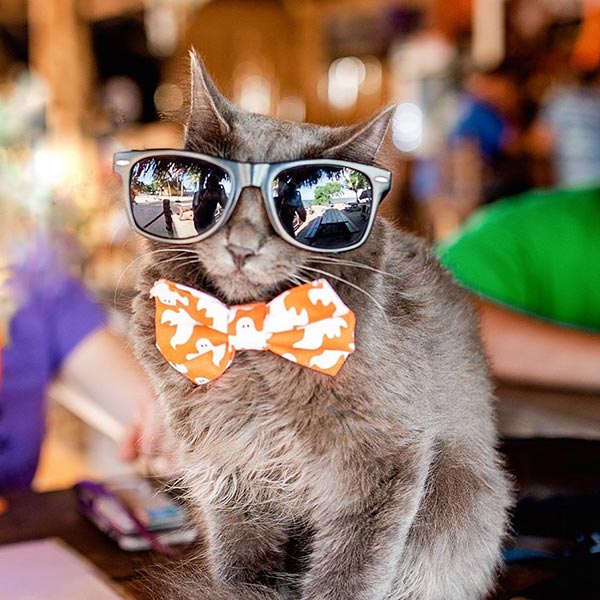 In the wake of her husband’s passing, longtime animal welfare advocate finds joy in providing pet therapy with her cat.

Clara Lee Arnold and her certified therapy cat, Professor X, both have an aura of sunshine. She has a lovely smile that puts people at ease, and it’s practically impossible to look at Professor X’s big yellow eyes and signature bowtie and not want to pet him.

Arnold can’t remember ever not wanting a cat. When she was a kid, her first pets were insects, then she moved to rats, bunny rabbits, and finally, when her parents allowed it, her first cat. Her life has continued to center around animals ever since. While running the Oxford Lafayette Humane Society in Mississippi for a decade in the ‘90s and early 2000s, she met Mike Harvey, the man who would become her husband.

“Our love and passion for animals was definitely something we had in common,” Arnold says. “His motto was ‘pay it forward.’ He just really thought that we would all do better if we all took the effort to help each other.”

Arnold even converted Harvey, originally a dog person, into a cat lover, when he rescued one and named him Jake, who is turning 19 this year. The couple poured themselves into animal rescue work, taking on the most difficult cases, including feral cats and animals with missing limbs, feline immunodeficiency virus and incontinence. They jokingly called their house in Tucson, where they moved in 2014, “The Arnold-Harvey Home for Wayward Animals.”

They were always looking for ways to improve animal welfare. After seeing the conditions of stray animals in Belize while on vacation, Arnold started the Hopkins Belize Humane Society in 2008. The organization holds free spay/neuter clinics, provides animal care to Hopkins and surrounding communities, and promotes partnerships with other humane organizations in Central America. Arnold travels to Belize several times a year to run clinics and other events.

Arnold was doing a clinic in Belize in 2016 when her husband fell down in the Pittsburgh airport and was rushed to the hospital. He spent two months in the hospital, before returning to Tucson to live in a hospice facility and passing away shortly after. In his final days, which weren’t entirely lucid, he often spoke about how they needed to go check on Jake or was petting invisible cats. Arnold requested visits from a pet therapy dog every day, and even walked to a local animal shelter for a little pet therapy of her own.

In the fall of 2018, Arnold took in a gray kitten that had been found in a dumpster in South Tucson. She expected him to be just one more bottle baby she would take care of for a few weeks until he was ready to be adopted. But she realized quickly there was something special about this one, who had a perfect mix of adventurousness and an intuitive sense of patience. She decided to name him Professor X and keep him, and the two started going on hikes together.

“I had been looking desperately for something to do to honor [my husband’s] memory,” she says. “I just thought that getting Professor X certified as a therapy animal would be such a special way to honor his memory.”

She did just that in June 2019 through the Humane Society’s Pet VIP Pet Therapy Program. The program, which certifies therapy animals to visit places such as hospitals, nursing homes and schools, currently reaches more than 60,000 people each year.

“She has trained him so well to interact with different animals, different species, different environments, and he’s just a love,” said Veronica Zimmerman, Pet VIP lead. “It’s an honor to have them as part of the program, because she just uses him in such a wonderful way to help people cope with their situations.”

Arnold says she’s been amazed by how much joy Professor X brings people even when he’s not on the clock. Strangers often approach to ask if they can pet him. He’s been to three weddings with Arnold, including one where Arnold was the maid of honor and Professor X wore a tiny tuxedo to match her dress. As for official therapy, they try to average about one pet therapy visit a week, to facilities such as hospice and memory care units.

Arnold spent Christmas 2019 at the Center at Tucson, an inpatient facility which serves patients who need physical rehabilitation or complex nursing care. She says seeing the way Professor X brightened the faces of patients and their families made for one of the best Christmases she’s had in years.