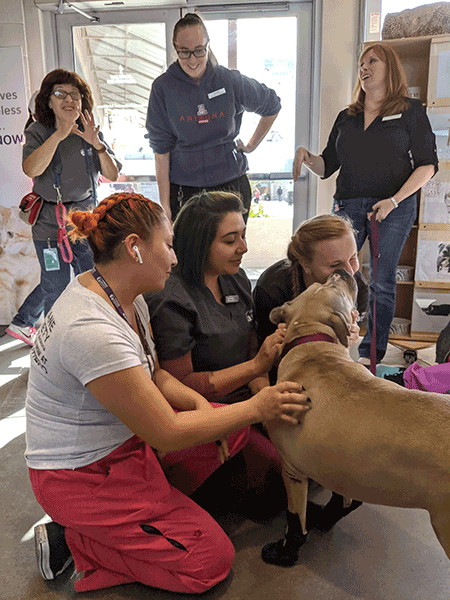 624 Days in the Shelter and 1 Perfect Home: Local dog finds forever family after nearly two years at the Humane Society of Southern Arizona.

Sometimes good things take time. Even the very fastest trip to visit all sovereign nations, for example, took Cassie De Pecol 559 days, according to Guinness World Records. Cosmonaut Valery Polyakov holds the record for the longest stay in space, at 437 days. And for a local pit bull mix named Gabby, it took 624 days at the Humane Society of Southern Arizona before she was adopted by a permanent family.

“Gabby has a very loving and easygoing personality,” said Christian Gonzalez, director of shelter operations. “It doesn’t take much to quickly fall in love with her… We couldn’t be happier that after 624 days of continued love and care that Gabby is finally in her forever home.”

Gabby, now 6 years old, was found as a stray and arrived at HSSA in 2017. Her loving personality and sweet face meant she quickly claimed a special place in the hearts of many shelter staff members and volunteers. However, her Canine Atopic Dermatitis, a severe form of allergies, means she requires several forms of special care to treat itchy skin, swelling and possible fungal infections in her toenail beds. Her medication, medicated baths and special diet mean extra time and expense that many families weren’t ready to take on.

Still, plenty of Tucsonans fell in love with Gabby after seeing her featured on local television stations, hearing about her on the radio and seeing her in every issue of the Tucson Dog since November 2018. Monique Conway, marketing and public relations lead at HSSA, often accompanied Gabby on these media appearances, and she grew to love the cuddly canine as well. Every outing started with getting Gabby ready to leave her kennel by putting on a set of booties to protect her feet.

“She would literally stand and wait and let you put one on each foot,” Conway said. “I had to [try to] put them on a couple times, and she was very patient with me. She’d let me adjust them and fix them, and while I was putting the booties on, she would be licking my face.”

Her extended stay in the shelter—it’s rare that a dog stays at HSSA for more than a year, and Gabby was coming up on two years—also meant she had plenty of time to grow. She participated in the New Beginnings Program when she first arrived, where she learned basic obedience and improved her socialization skills with other dogs. She also quickly adjusted to her medication, including an ointment veterinary technicians applied to her paws every day. In fact, when she’d see technicians like Stephannie Miles, she’d roll onto her back in anticipation of a belly rub.

Gabby’s new family, who wishes to remain anonymous, adopted her on October 30, 2019. Gabby was the star dog of HSSA’s Century Club Program, which sponsors adoption fees for pets who have been in the shelter for more than 100 days.

“It’s going to be a really good fit,” Conway said. “There are a lot of people that have looked at Gabby and met Gabby and fallen in love with her, but there’s so many medical things that she requires that it was really hard to find that perfect adopter that would take that all on.”

The adopters don’t have any other dogs, and they understand that loving Gabby properly requires some extra work and attention. However, Conway admits there’s one thing the adopters probably weren’t prepared for: how many friends Gabby had made at the shelter, and how hard saying goodbye was for them.

“We found out they were sitting down to sign the adoption paperwork and people started to swarm the adoption area waiting for her,” Conway said. “Literally everybody that was able to that was at the shelter was up front in our lobby. She was rolling around on her back and giving kisses.”

Though she is missed at her old home, Gabby is adjusting well to her new one. Staff and volunteers were delighted to say hi when she returned to HSSA for a veterinary visit in November. And her spirit lives on in the shelter. Conway said she’ll still catch herself doing double takes when she walks by and sees another dog in what was known for so long as “Gabby’s kennel.” A donation also funded a project to rename the shelter’s volunteer dog-walking station “Gabby’s House.”

“This is ultimately why we all work there, is we want to find the perfect home for every pet,” Conway said.