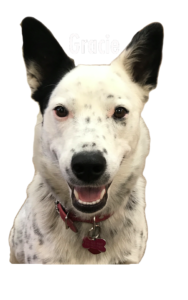 Did you know that January is National Train Your Dog Month? Since you humans like to make New Year’s Resolutions, make a resolution to learn something new with your four-legged friend.

Why January? Because so many dogs and puppies are adopted around the holidays, and because a good number of those dogs are given up to animal shelters or abandoned soon after.

APDT understands training could be the one thing that makes or breaks a dog’s chance to stay with their family and in their home. Training Keeps Dogs in their Forever Homes.

Though most people who get a dog do so with the best intentions, those who wind up surrendering their new pets to the shelter often do so because they just can’t cope with their dog’s behavioral issues.

Maybe the dog is hyperactive, yappy, or destructive. Perhaps they’re fearful, shy, lashing out, or behaving aggressively. Most often, it’s not because they’re bad dogs. It’s because they don’t have the tools they need to know how to behave appropriately.

Inexperienced owners might try temporary fixes that only make problems more severe, like isolation from the house and family, yelling, shock collars, or worse. By the time these dogs end up in a shelter, they’re confused and ill-equipped for life in a home.

That makes January the perfect month to remind pet parents, new and experienced, to take the time to train their furry friends. With consistency, well-timed praise and rewards, a level head, lots of practice, and the guidance of an experienced dog-training professional, you and your pooch will learn and grow all year long.

Check out The Tucson Dog Magazine for trainers or ask a friend or your veterinarian for a referral.

Lastly, remember that training your dog is not only beneficial; it’s also a lot of fun. Dogs thrive on mental stimulation. We love the chance to learn and practice something new and more than anything, we love your attention and feel good when we work together!

Remember, time spent training is time spent bonding, making priceless memories, and building a strong relationship between you and your dog. Isn’t that what having a dog is all about?