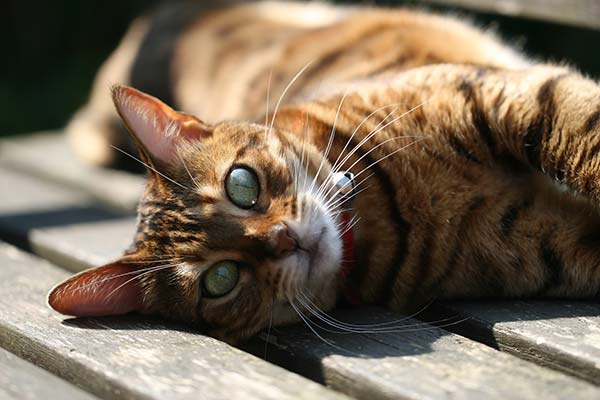 Story and Photos by Rebecca West

For a lot of folks, the idea of owning an exotic feline rather than an ordinary house cat is hugely appealing. The call of the wild may not extend to the depths displayed in the recent Netflix hit “Tiger King,” but owning an exotic on a smaller scale is still a popular objective among many would-be pet owners. Because of this, we wanted to take a look at the reality of owning a hybrid feline, such as a Savannah cat or even a Bengal, two extremely popular kitties that are close descendants of wild animals.

If you’re completely in the dark, a Savannah cat is a cross between an exotic African serval and a domesticated house cat. Servals are wild, medium-sized cats noted for their long, lean bodies, long necks, long legs, and enormous ears covered in a tawny, black-spotted coat. Their body type allows them to see over the tall savanna grasses common in their natural habitat. Coupled with their height, their speed and agility make them deathly efficient hunters. They are considered physically unique in that, relative to body size, they have the largest ears and longest legs of all felids.

Breeding between the wild and domesticated animals began back in the mid-‘80s with a male serval and a female Siamese. These hybrid Savannahs are noted for their tall, slender bodies, large ears, and their ability to jump great heights in a single leap — much like their wild ancestors.

Another trait frequently espoused by fans of the breed is their intense bonding and loyalty toward those that raise them. The downside to this is their inability to successfully integrate into new homes once that bonding has been cemented. That’s precisely why you don’t want to go into owning one lightly.

Hybrids are generally classified F1 through F7. Each generation is marked with what’s called a filial number. These numbers signify generations removed from their feral forbearers. An F1, for example, is a first-generation offspring. The further removed (F7), the more domesticated. Most Savannahs you’ll see up for adoption are F4s and F5s, as they’re said to make the best house pets for temperament and behavior while retaining physical characteristics.

A Bengal cat is another relatively new hybrid consisting of a domestic cat and an Asian leopard, a small wild cat native to Asia. The cross produces beautiful medium to large felines, but like most exotics, they only make good pets if they are four generations removed from the original cross-breeding. Because Bengals are so genetically close to their wild ancestors, like Savannahs, they can revert back to wild or feral behavior under certain circumstances, even if they are F4s. There’s no real way to predict when or if this will happen, which is one of the disadvantages of hybrid cats.

If you’re entertaining the notion of getting one, there are numerous pros and cons to owning these animals. Exotic mixes are recognized for their extreme intelligence, strong bonding abilities, and incredible affection. They are often described as having dog-like personalities stemming from the odd noises they make to the ease with which they’re trained. Playing fetch and walking on a leash are common accomplishments. Many are known to tolerate, if not enjoy, water.

On the flip side, they are regularly described as being mischievous — a euphemism for being a pain in the rear — and often suffer from separation anxiety frequently resulting in bad or destructive behavior. They are high energy with over-the-top activity levels that include extreme jumping and climbing. Peeing or scenting on everything (including humans) has been seen, they have an unpredictable nature, and dominance issues with other pets (and even family members) are reported. They also like to be at the center of things and can be relentlessly demanding. In other words, they won’t be ignored, so don’t even think about it.

Additionally, hypertrophic cardiomyopathy (HCM) is a health concern in many pure breed cats, and a link was recently discovered between Bengals and cases indicating that HCM may also be a reoccurring health issue in servals. Depending on who you listen to, hybrids also require special diets high in meat and taurine without grains and byproducts. Another thing to consider is laws governing ownership of exotic cats in the U.S. vary from state to state. Even if you’re allowed to have one, there’s also the issue of vaccines for hybrids, which not everyone agrees on.

These cons might not seem so untenable until you’re experiencing them. That’s why, when you see one pop up on Craigslist and other sites for adoption or “rehoming,” it’s crucial you go into ownership with your eyes wide open. Making a decision like this based on impulse is detrimental to the animal and you.

The long and the short of it is this: There are so many cats and other unwanted animals waiting for homes in shelters and rescues across the globe, please consider giving one of them a forever home before taking on ownership of an exotic that you may ultimately have to surrender.