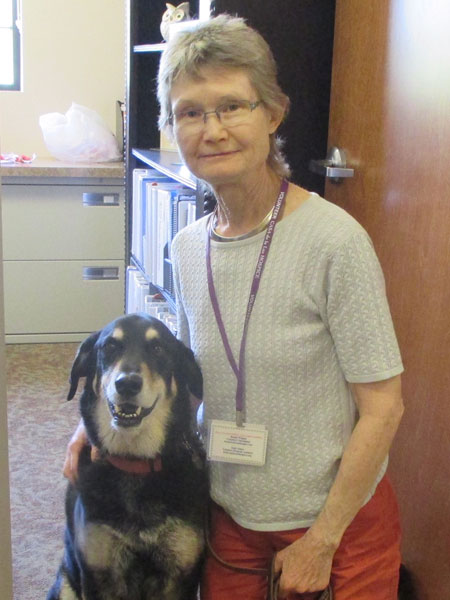 Cheryl Purvis first got her shepherd mix, Buddy, in 2015. She’d recently lost one of her two dogs, so he came at a perfect time. When she started volunteering with Casa de la Luz Hospice, she decided Buddy’s calm, friendly nature might make him a good fit to be a therapy dog, visiting hospice patients to bring them a little bit of joy. Casa de la Luz has had a pet therapy program since 2008.

She took Buddy to the Humane Society of Southern Arizona and had him certified as a therapy dog through their three-week Pet VIP program, which certifies animals ranging from birds to llamas to pot belly pigs—though they most commonly work with dogs. The course teaches owners how to recognize their pets’ body language, how to train them with positive reinforcement and how to advocate for their pets. Purvis found her instincts were right: Buddy, now 11, started his role as a volunteer therapy dog at Casa de La Luz in 2016, and he was a natural.

“He loves his job,” she says. “He has a pet therapy dog vest. I have a particular bag with all my equipment and his treats and my ID that only comes out when we go on a visit, on ‘a gig.’ Buddy gets very excited when he sees it, and he leaps around a bit. For him, since he’s not a big leaper, that shows he’s excited.”

Animals who go through the Pet VIP program must be homed with their owner for at least six months, so the owner can have a good sense of the animals’ temperament, strengths and weaknesses. Veronica Zimmerman, Pet VIP Therapy and Visitation Program lead at HSSAZ, has spent more than two decades training animals, from service dogs to therapy dogs to trick dogs. She’s even trained chickens! In addition to hospice facilities, teams in the program visit sites ranging from universities to suicide prevention events, bereavement camps and hospitals.

“Sometimes you get people who are experiencing changes in their lives, such as a stroke or something like that, so they’re not able to move very well or communicate,” Zimmerman says. “Just touching that animal and feeling that touch really helps them to connect to humanity.”

Purvis agrees from her firsthand experience that an animal’s impact on patients is often simple yet profound. When she and Buddy go into a patient’s room, he might do a few simple tricks. Oftentimes, Buddy will simply lay down while Purvis and the patient talk for a few hours. Sometimes they’ll watch a movie about animals, such as Air Bud, together. If a patient is sleeping, she’ll ask the family if they think the patient would like to hear Buddy speak, and if they say yes, he’ll bark. Of course, she adds, they only visit where they’re wanted.

“You see how well-loved Buddy is,” she says, describing a time when she and Buddy went to visit a patient who was actively dying, meaning their death was expected within hours or minutes. “The family was all there, and it was very important for them, it seems, to have a dog there, because their parent had been a dog person, and they were all dog lovers. So it was really part of a rite of passage to have a dog there with them at that time.”

Zimmerman, who has two dogs certified as therapy animals herself, says the benefits of having animals around are often extended beyond the intended audience. Many of the owner-pet teams she’s worked with have reported a similar surprise.

“What they’ve seen is that they help the [patients’] families a lot to just escape what’s happening and give them a little bit of a way to cope, with good memories of pets they have,” she says.

Purvis has seen Buddy’s impact go beyond patients many times on her visits to hospice centers.

“Buddy and children have had some very good encounters,” Purvis says. “There’s not a lot for them to do there, and a dog is soft and warm and fun.”

When Purvis and Buddy go on a visit, they usually leave the patient a little card with photos of Buddy on it as a keepsake. One patient displayed the card proudly on her shelf, and told her family that Buddy was her boyfriend. The joy animals bring can take many forms, but Purvis finds all of them worthwhile.

“It’s rewarding in that we get to provide this service and, you know, people who may really need a little break from what’s going on in their life can get it,” Purvis says. “It makes me feel like I’m giving meaning to his life as well, because I think dogs need that just like people do.” 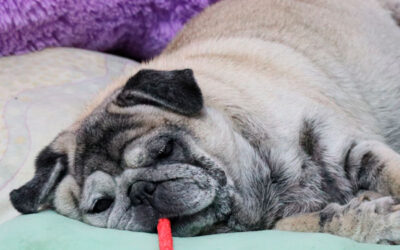 Is Your Pet Packing On The Pounds? 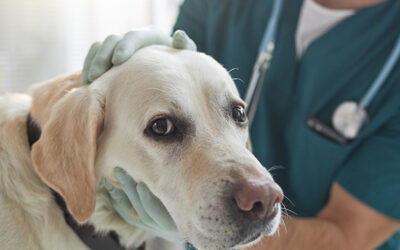 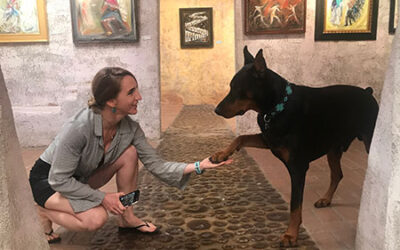