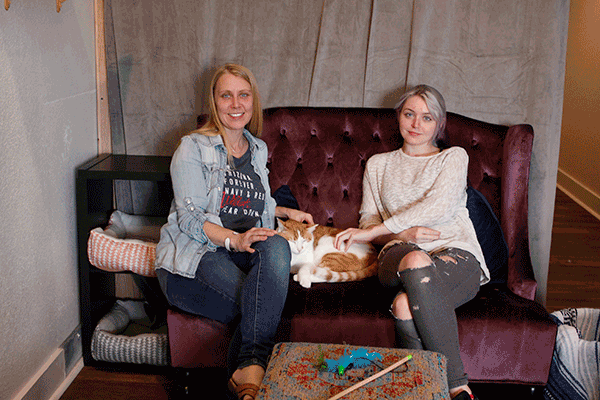 Tucson’s first cat lounge has three stories, 20 cats and enough joy to turn even the worst day around.

For devoted cat lovers, a three-story building where nearly two dozen cats roam freely through a yoga studio, a movie-viewing room and a cozy lounge area might sound like something that could only happen in an indulgent fantasy. But with the opening of El Jefe Cat Lounge in Tucson in October 2019, a far-fetched dream has become reality.

Co-owners Tiffany Lee and Jeff Wiese are partnering with the Hermitage Cat Shelter for the endeavor. The shelter provides the lounge with healthy, personable cats, who are available for visitors to cuddle, play with and even adopt. There are board games for guests to play, a room where they can watch movies and plenty of cozy places for both humans and cats to curl up. Guests can also sign up for meditation and yoga classes or rent out entire floors for events like yoga or movie nights. El Jefe currently houses 20 cats at a time, but they plan to expand to 30 in the coming months.

Once, when Tiffany was having a bad day, she and Jeff, her boyfriend, decided to go to a cat lounge and boutique where they lived at the time in Phoenix. He hoped it would cheer her up, but he didn’t exactly understand the appeal himself.

Once they were there, Jeff couldn’t help but notice that, not only was Tiffany cuddled up in a beanbag chair with a cat, her worries melting away, but everyone in the cat café seemed happy. He’d moved to Arizona recently, with plans to continue working in the IT sector, but he’d started to realize he was feeling burnt out. Tiffany already has a background in sales, marketing and entrepreneurship, and the day at the cat cafe was something of revelation.

“We just thought, ‘I want something less stressful and more meaningful,’” she said.

They decided to start their own cat lounge in Tucson, so as not to compete with La Gattara, and because the community oriented, college town of Old Pueblo felt like a perfect fit. After all, it’s a town full of proud Wildcats! Finding a venue wasn’t easy—not many landlords liked the idea of having 20 cats as tenants. But perseverance paid off, and they opened their doors for a soft opening on Halloween 2019.

“After they got a space, it just took off,” said Karen Baden, executive director of Hermitage Cat Shelter. “It’s allowing us to expand our walls to such a different height, and it’s really exciting for us.”

Opening in Tucson also gave Tiffany and Jeff a chance to give their business the perfect name: The lounge’s namesake is the North American Jaguar that’s been sighted in the Santa Rita Mountains, and who, for five years, was the only verified jaguar living in the United States. El Jefe is known for two distinct markings: a heart shape on his right hip and a question mark over his rib cage. Tiffany’s daughter, Victoria Brown, an illustration major at the University of Arizona, incorporated both symbols into the logo she designed for El Jefe Cat Lounge.

In their first few weeks being open, Tiffany said she was surprised by the diversity of their customer base. It wasn’t just millennials or college students flocking to the lounge after they’d seen similar places on social media. Everyone was coming in for some cat cuddles.

“It’s been a mixture of all ages,” Tiffany said. “The older generation has been really supportive and embracing. They come and they kick back on the couch and they’re happy. Everybody likes cats.”

Tiffany and Jeff don’t have any cats at home, but they spend so much time seeing cats in the periphery of their vision that Tiffany says they see cats everywhere. They’ll often do double takes at home, thinking a pair of shoes in the corner is a cat. But they get all the cat interaction they need at El Jefe, and they hope guests will too, as no outside animals are allowed in the lounge.

One of the most pleasant surprises about the endeavor is how many cats have already been adopted. In the first few weeks the lounge was open, they averaged four adoptions a week.

“Having them exposed in a positive light is beneficial not only to the lounge, but to the cats,” Baden said. “The cats that are there are amazing cats, so it’s an easy transition for new cat owners, or someone that has several cats at home.”

El Jefe Cat Lounge is located at 3025 N. Campbell Ave., Ste. 141. hours are noon to 8 p.m. on Thursdays, noon to 10 p.m. on Fridays and Saturdays, and 10 a.m. to 6 p.m. on Sundays. Reservations are $10 an hour per person, and prices for meditation and yoga classes vary. Learn more at eljefecatlounge.com.