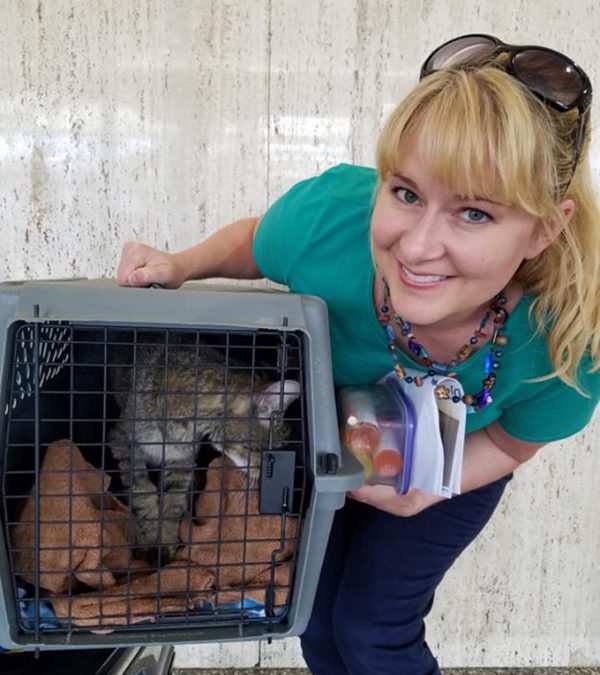 Some animals have names that fit them. The rational, sometimes cynical tiger from Calvin and Hobbes is named after the like-minded philosopher Thomas Hobbes. Simba, from the beloved Lion King movies, is named the Swahili Word for lion.

DJ Microphone falls somewhere in the middle: His meows can be so loud, and so long, that they sound like they’re blasting through a microphone. But having the outgoing, crowd-pleasing personality of a DJ? Not so much. At 15 years old, he’s more particular about who he wants to spend time with. But ultimately, he’s a loving cat who was looking for a home.

DJ Microphone came to the Pima Animal Care Center with a slew of medical issues, and while shelter staff and volunteers took care of him as best they could, they eventually had to put him on deadline because he wasn’t progressing. When PACC staff posted a picture of DJ to Facebook with a plea for someone to provide him with a loving home, the post received lots of attention, with nearly 200 shares and more than 100 comments. People started pledging money to help pay for his medication.

His salvation came from an unlikely place. Beverly Miner was scrolling through Facebook one day when she saw the picture of DJ Microphone, and was immediately struck by him. A year and a half prior, Miner had lost an 18.5-year-old cat named DJ who looked just like DJ Microphone. In addition, Miner herself had recently been diagnosed with the same medical issue as DJ Microphone. It was like fate. The only problem besides convincing her husband (which didn’t take long) was that she lived in Oklahoma.

Wendy McFeely, a frequent volunteer and foster care provider at PACC, said it’s not uncommon to see comments like this.

“People say, ‘Oh, I’m in Massachusetts! I love that cat!’ but nothing necessarily comes out of it. For some reason, with this one, it was just like, ‘This is where DJ needs to go.’”

DJ Microphone’s Facebook thread blew up even more as people scrambled to find a way to get Miner her meow-er. Ideas were flying about escort services and airline programs, and PACC extended his deadline because they knew he had a home waiting for him.

When McFeely heard mention of waiting until it was cooler for DJ Microphone to make his trip, she wasn’t having it. First of all, she didn’t want him to have to wait for the weather to cooperate to go to his new home. Second of all, she wasn’t going to let him fly in a crate–he belonged in the cabin. She has four cats of her own at home–one of whom is diabetic, one with renal failure, one especially grumpy cat, and one from Egypt, but she brought DJ Microphone home as a foster and resolved to find a way to get him to Miner. The more she thought about it, the more she realized she’d done plenty of flying back and forth to Egypt with her Egyptian cat. A four and a half hour flight to Oklahoma sounded like a piece of cake.

“So finally, I just said, “You know, I have a lot of frequent flyer miles. I’m going to go look into getting him out there.”

McFeely and Miner coordinated schedules, and agreed to meet at the Tulsa airport. McFeely worried about DJ Microphone being crotchety on his journey, but with a dose of medication to help keep him calm, he was a perfectly happy cat for the whole flight.

“It was the best four and a half hours ever that I can imagine,” McFeely said. “He did so well, so that was kind of neat.”

When McFeely landed in Tulsa, the two women and the cat got together for some photos; DJ Microphone went right out of his crate and into Miner’s arms. In less than one month, DJ MIcrophone had gone from the subject of a last-ditch effort Facebook post to an Oklahoma resident, with two loving parents, six cat siblings and one dog brother, all of whom are also rescues.

Miner said DJ is acclimating to his new surroundings, slowly but surely. They change up his food a lot; the vet put him on antidepressants to help his mood, and, thanks to the generosity of the total strangers who wanted to make sure DJ Microphone found a good home, his health is improving. Miner has a credit at her vet’s office for the first time ever.

“I would definitely, definitely encourage people to adopt elderly cats or cats that might have health issues,” she said. “I hope that maybe we can get another couple years for him. Whatever time he has left, I want it to be good.”

If you are interested in volunteering or fostering at PACC, you don’t have to fly to Oklahoma! Visit pima.gov/animalcare to learn more. You can also visit the Pima Animal Care Center, or pages such as “PACC Cats Need You” and “PACCCats: Mission Pawsible” on Facebook.