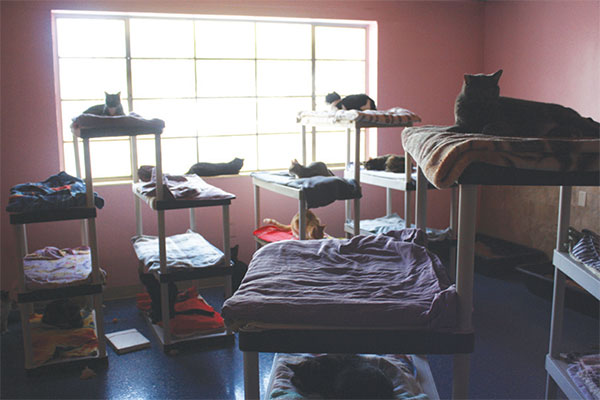 Story and photo by Devon Confrey

Sheryl Campbell never imagined when she was younger that one day she’d find herself surrounded by cats. Nor did she think she’d have the job she has now—one where she’d choose to wedge herself between a fence and a shed, using a rake to bring a litter of kittens to her one cat at a time.

As executive director of PAWSitively CATS No-Kill Shelter, Campbell is the lead guardian of over 180 cat lives. Her duties include getting cats ready for forever homes, caring for cats that otherwise might not have been saved, and lending traps to help spay or neuter feral cats.

Cats relax and strut along the PAWSitively property, converted from an old house, like they own the place, without worrying whether or not they’ll be adopted. But they almost weren’t so lucky. Another shelter, where Campbell volunteered 5 years ago, home to nearly 450 cats and 4 dogs had to close.

“There was nowhere for these animals to go,” Campbell said. The shelter had no back-up plan for them. “There isn’t one shelter in this country that would step in and absorb this many animals,” Campbell said. So she and some others she was working with decided to get together and do just that.

Until then, PAWSitively CATS had mostly focused on helping keep stray kittens from being born, by humanely trapping cats, having them spayed or neutered, and then returning them to where they lived. The business grew out of Campbell’s earlier efforts to control the feral cat population at a low-income housing complex where she was a rental manager, which had multiplied to a point that Campbell found a kitten that had been hit by a car. Tenants donated whatever money they could to assist her mission. She started out equipped with only a fishing net and an oven mitt.

“I would go to work, dress, heels, nice clothes, a little bit of make-up on, change into my jean-shorts and scroungy t-shirt and tennis shoes.” Campbell said. “I was crawling on my belly underneath cars and oil pits and stuff, snatching up kittens out of the middle of cactus patches.”

Cats that are leukemia positive live in their own room that they play in at PAWSitively CATS. Older cats, cats with special diets, and cats that prefer to avoid everybody else have their own spaces too. There are sponsorships for these cats that are less likely to be adopted. The main population mingles in the air-conditioned areas, taking naps in the dim light, stretching between blankets on bunk beds.

These cats can be met on Saturdays during adoption events at PetSmart at 4740 E. Grant Road from 11 a.m.–4 p.m. or at the shelter at 1145 N. Woodland Ave. from 11 a.m.–3:30 p.m., or by appointment. Also, PAWSitively CATS will be hosting a cat art auction on Tuesday, October 31, at La Cocina downtown. The fundraising event starts at 5 p.m. and will have jewelry, clothing, sculptures, and paintings along with music and a raffle. The shelter is largely run by donations.
“We could not do everything that needed to be done without volunteers,” Campbell said. A regular group of about 30 people come and help brush the cats and clean the facility.

“I don’t think the general public realizes the scope of the problem we have with abandoned free roaming animals in this city,” Campbell said. Spaying and neutering cats can get expensive. Especially when there are whole families found at once.

“I wish we didn’t have to do it,” Campbell said. “I wish we could all shut down. I wish there was a waiting line.”

The impact of all the shelters and foster homes in town is spreading the adoption burden, making it more manageable.

“We all do what we can,” Campbell said.

As much as PAWSitively CATS is a sanctuary for cats without homes, it can’t keep up with the number kittens born daily.

“It’s sad that we have the issues we have with animals being abandoned, or people taking in too many,” Campbell said. She reached into a carrier on her desk and pulled out a small pink cat, Jedrek. He is the only one of six kittens that survived after being rescued from a house where a man who had died had 31 cats in his care.

“He picked up the animals that people dumped and left behind in this tiny little trailer park,” Campbell said. Even though there were kittens, Campbell said, a lot of the cats had been spayed or neutered. Jedrek mewed until he had his bottle of milk, purring after he finished.

“I know in my heart he’s not out of the woods,” Campbell said. “But I certainly hope that I’ve done everything for him I can to give him a good healthy life.”

If you would like to donate or volunteer for PAWSitively CATS, you can find them at PAWSitivelyCATS.org or call them at (520) 289-2747.

Kids and Animals: Cody Allen — A Most Popular Young Fellow