Kids and Animals: Cody Allen — A Most Popular Young Fellow 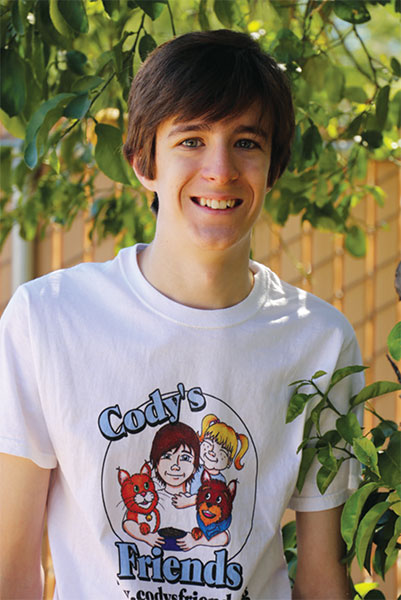 Cody Allen is a young man with a purpose. Oh, and he has friends, lots of friends. When Cody was in fifth grade he decided to follow in the footsteps of his hero, John F. Kennedy. President Kennedy famously said, “…ask not what your country can do for you—ask what you can do for your country.” Inspired by these words, Cody has been helping his country by providing basic necessities for kids and pets in Southern Arizona for the past 6 years.

What began with a prompt from a school assignment has grown steadily into an organization that touches hearts and lives throughout the community. In the beginning, Cody distributed flyers around town, asking folks to place donations of items for kids or pets on their porches once per month. He and his mom, Amber, spent over a year lovingly collecting those first donations, one household at a time. Since that time, with the help of his sister who established his Facebook page (CodysFriendsCharity) and website (www.codysfriends.org), the word has spread. Cody’s Friends became a 501(c)3 nonprofit organization through services donated by local attorney.

There are two separate aspects of Cody’s Friends. First, the organization serves as an affiliate distributor of pet food to registered nonprofit organizations. Cody receives recurring food shipments from an organization, Rescue Bank, which is headquartered in Houston, TX. They are an affiliate of GreaterGood.org. According to Rescue Bank’s website (www.rescuebankhouston.org) they are “a collection and redistribution point for surplus pet supplies and donations.” Rescue Bank donates 50,000 pounds of food at a time to Cody’s Friends; this food is earmarked for donation only to registered 501(c)3 organizations, such as the Pima County Animal Shelter and the Humane Society of Southern Arizona.

When he is not working with his Friends, Cody stays very busy caring for animals. He currently works for a local veterinary office, and he has been working full-time during his summer “vacation.” Cody’s inspiration for focusing on animal welfare was his perception that Tucson has problems with animal cruelty as well as problems caused by large-scale breeding. He said, “I have always wanted all dogs and cats to have a good home because it hurts to see one by itself in the streets.”

Cody will be attending Pima Community College through a dual enrollment program with a charter school that will allow him to finish 11th and 12th grades while getting a jump start on college classes. He’s already ahead of the pack, having taken chemistry, physics, and biology for 4 years, Latin for 5 years, and a first-year medical school pathology course through Banner Hospital.

It should come as little surprise that Cody was a recipient of a Ben’s Bell award (www.bensbells.org) in July. The mission of Ben’s Bells is “to inspire, educate, and motivate people to realize the impact of intentional kindness, and to empower individuals to act according to that awareness, thereby strengthening ourselves, our relationships and our communities.” It is easy to see why Cody’s efforts came to the attention of Ben’s Bells. His mom, Amber Allen, said, “He is a huge animal lover and when someone brings a rescue to Cody’s Friends he gets down on the floor with them all. I don’t believe there’s ever been a dog come in that he doesn’t embrace or vice versa. Sometimes I wonder if he’s a dog whisperer.”

Cody’s Friends is always looking for help in the form of donations and volunteers. For more information and to get involved, check them out online at: www.CodysFriends.org, email: helpcodysfreinds@gmail.com, or call: 520-419-0450.

The Tucson Dog loves hearing from our readers! Special thanks to Tucson Dog reader Joan Unwin for letting us know about Cody’s Friends. Do you know of a kid who is doing good work with or for animals? If so, I would love to hear from you! Email: claire@thetucsondog.com.

Horsin Around: A Home Where Horses Can Be Horses