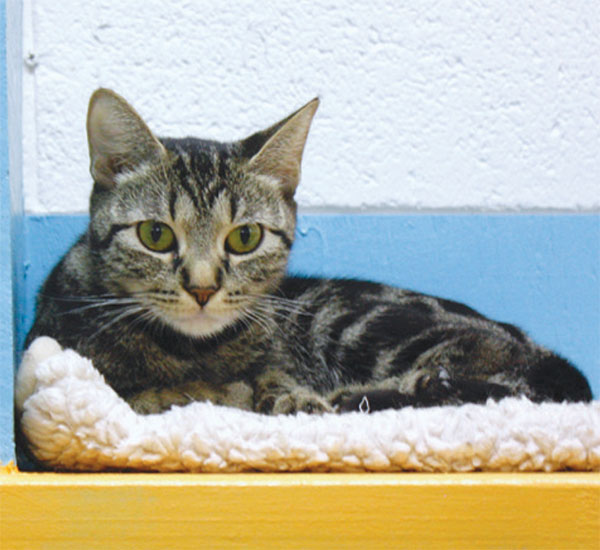 Story and photo by Devon Confrey

As the Pima Animal Care Center and the Humane Society of Southern Arizona construct new buildings this summer, a third shelter – the Hermitage No-Kill Cat Shelter and Sanctuary – with a vibrant past in Tucson, modernizes as well, rebuilding from the ground up.

The Hermitage rescues and finds homes for cats that otherwise might be left as lost causes. This sanctuary provides a place for them to stay for life, and veterinary care, whether or not they are adopted.

During their stays, the cats at the Hermitage roam large cage-free rooms. Geriatric cats, diabetic cats, cats with gastro-intestinal issues, Feline Leukemia Virus, or Feline Immunodeficiency Virus, along with those healthy and in their prime, all find their own spaces to stretch out in.

After 50 years of renovations, the old building at 5287 E. 21st St. has been demolished. A new one is going up, for which the shelter raised over $1.2 million in funding.

“One thing it’s going to offer is a better place for the cats. It will be very feline centric,” the director of development and marketing at Hermitage, Lee Bucyk, said. “What it offers the community is the opportunity to take in more cats.”

Originally from Chicago, Bucyk has lived in Tucson for twelve years, and has worked at the shelter for the last four. During that time, she’s been Executive Director, though recently her title has changed.

For the last year the Hermitage has taken temporary residence in a smaller building at 4501 E. 22nd St. “The new facility should be completed by mid-August,” Bucyk said.

After that comes the Hermitage’s gala event in November, where bearded cat behaviorist and host of the Animal Planet show “My Cat from Hell,” Jackson Galaxy, will speak.

The Hermitage was started by a spirited nun from England, who had gone to school in Switzerland and lived in a Russian Orthodox convent in California, before moving to Arizona because of her arthritis. Sister Theresa Seraphim first began offering a home to animals in Tubac. She made the Hermitage her home and her work after moving to Tucson in 1967, with her newly published book about the sacredness of animal life.

Bucyk too, is lively, though maybe more reticent than Sister Seraphim. During our interview, she took time to give Dory, a cat lying on the table, a scratch on the head.

As for the summer in Tucson, “I think the main concern is controlling the population,” Bucyk said. “I think that’s one thing that all the rescue groups have in common is we’re just really trying to educate the public to spay and neuter their animals to control the overpopulation, so the animals don’t end up in shelters.”

This year has been hot for the Hermitage, in more ways than one.
“It’s been a big kitten season because it’s been so warm,” Bucyk said. “The winter was warm; it’s like breeding just went on and on and on.”

All over the city, new cats are being born. The Hermitage takes on the wave annually with a “Kitten Shower” adoption drive.

“The Hermitage, and every other shelter, desperately needs foster homes,” Bucyk said. “That’s huge for us, it’s hard to find a lot of fosters.”

Bucyk has had to contend with the challenge that public relations doesn’t always come naturally for a shelter of whiskered ones. Creativity is a necessity in feline outreach.

“If anything that’s changed in the last couple of years I’ve been here, I would say it’s the addition of programs and services for the public,” she said.

Over the last year the shelter distributed 41 tons of dog and cat food to pets in need. “Cat Camp for Kids,” which runs in the summer, and programs like “Purr for Autism,” help children build relationships with animals, while other programs get cats out into the community by visiting the VA or living facilities. The Hermitage even held “Catapalooza!,” a benefit concert featuring local metal bands.

In between screen doors, two cats growl at each other. “Some of them act up. Sometimes, there’s no way around it.” Bucyk said.

The blanketed cat trees in the rooms are colorful and plentiful. Some cats seem to congregate on particular trees, while others remain untouched. A cat-coop provides those seeking some shut-eye a dark place to cuddle up.

Up on shelves that run along the length of the room’s high roof, one black cat strides along before collapsing with a thump and lying down.

“Cats love vertical space, so the more vertical space you have, the better.” Bucyk said. This shows in the shelter, which is a jungle gym for cats – 235 of them on a day in May, that is, until one was adopted.

“It’s hard not to want to take them home,” Bucyk said.

Kids and Animals: The Beauty of Bella