Kids and Animals: The Beauty of Bella 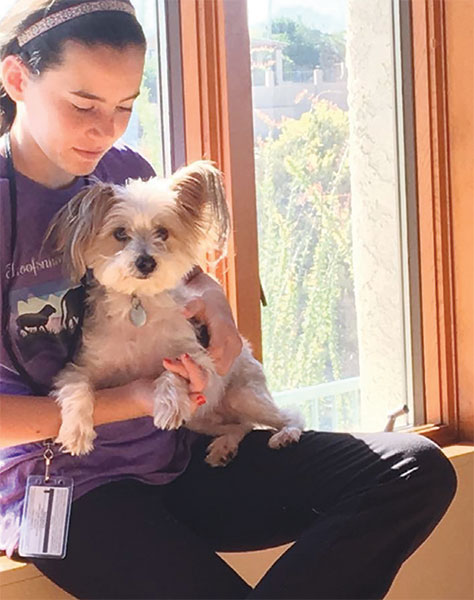 The Beauty of Bella

Bella Wexler is your typical fourteen-year-old, that is if the phrase “typical teenager” conjures up images of a brilliant, socially conscious, philanthropic, animal-loving young woman who looks like she belongs on the cover art of an independent music record. There are people you meet who you can tell are as beautiful on the inside as they appear on the surface, and Bella is surely such a person.

For her Bat-Mitzvah, Bella raised approximately $3,000 for a nearby animal rescue called Hooves N’ Horns. The rescue focuses on saving farm animals from poor conditions and the fate of becoming factory food. Although she likes all animals, Bella has a special place in her heart for farm animals. She became a vegetarian as a result of her study of the farming industry and concern for animal welfare, and she aspires to veganism one day. Bella has been inspired by her older sister, Lilly, and her mother Allison, both of whom are animal lovers and activists.

It isn’t just her mom and older sister who support the animal welfare cause; Bella’s father, local dentist Michael Wexler, is also an active part of the volunteerism. A few years ago, Michael and Allison took a trip to Thailand, during which they donated their time at a rescue for dogs who otherwise would have become food. From that trip, Mom and Dad brought home a dog who became a member of the family. Allison is also part of the dog rescue group, In The Arms of Angels. As a result of her involvement, the family provides foster care to a multitude of dogs on a continuously rotating basis. One of whom, Markie, was introduced to me as a “foster failure” because he has been permanently adopted by the Wexlers. The family facilitates visitation for Markie with his former human, who is struggling with health problems.

Next year Bella will attend Catalina Foothills High School, after a tough decision to turn down her acceptance to University High School. Unlike many kids, she isn’t content to take the summer off to vacation. Instead, this summer Bella will be taking classes to get a jump start; she intends to use the time she frees up during her normal academic year to add Mandarin Chinese class to her schedule. She hopes to travel, and is considering being an exchange student, or possibly hosting one. She looks forward to traveling so she can gain exposure to other cultures, with the goal of becoming involved in human rights work in the future. She believes that human rights provide the foundational basis for animal rights. Bella said, “We need to have human rights at the level they need to be in order to treat animals the way we treat people.”

When asked about her favorite subject, Bella chose English because, in class, they talk about philosophy; this past year they wrote speeches about what makes us human. She enjoys writing, and has been writing poetry since third grade when she wrote a poem about people misunderstanding pit bulls. She has also written a poem about Isabel Celis, a little girl who went missing in 2012, and whose remains were just found this year. Her poetry usually focuses on problems in the world, and her current writing is about “trying to navigate doing as much as I can in the small life that I have. I want to impact the world as best I can, in as prominent a way as possible, in the little time I have. So many things need fixing.”

Bella is also a musician who plays the French Horn. When she isn’t playing music, she enjoys listening to Korean music, or K-Pop, which she was introduced to by one of her friends. She also listens to Chinese music, so that she can try to “self-teach” herself Chinese! She uses Skype to communicate with a friend from 5th grade who now lives in Taiwan, and she practices her newly acquired Chinese language with that friend.

She seems to come by her passion for people, animals, culture, and travel genetically. In addition to her parents’ Thailand trip for dog work, Allison has traveled to Nepal to volunteer at an elephant rescue sanctuary, and Michael has provided pro bono dental services to refugees in the local Tucson community. Bella said that she has “an amazing family,” and that her “parents and sisters are inspiring.” She credits her mom with teaching her that “the world is only as big as you make it.” She wants to learn about other cultures and languages in order to “expand [her] capacity to see how big the world is.”

Most certainly, the world is a better place from the positive energy of this amazing young woman, and the lives of many animals are better because of her kindness and generosity. The Tucson Dog salutes Bella Wexler and her family for their contributions to animals the world over.

Do you know of an amazing kid whose contributions to animals should be included in our next issue? If so, I would love to hear from you. Please email me at: claire@thetucsondog.com