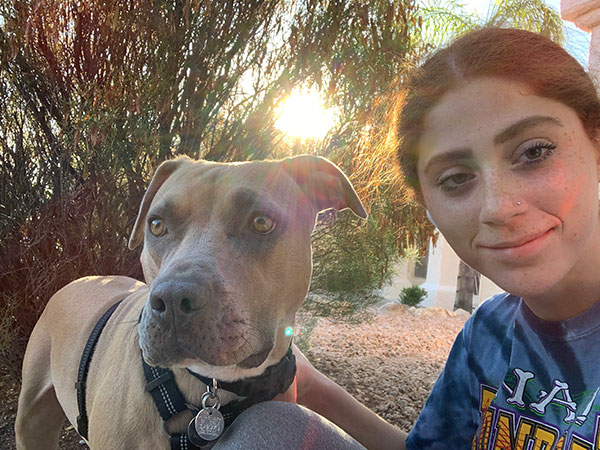 Aladdin is a Disney story beloved by many, including local high school student Maggie Behzadi. Knowing that Dahlia is the name of Jasmine’s loyal friend and servant in the tale, finding a dog at Pima Animal Care Center by this name made Maggie’s future companionship with the pup feel meant to be.

Since Maggie adopted Dahlia in April, the two have overcome obstacles ranging from both of their mental health struggles to public health concerns during a pandemic. Now, they continue to prove that this era of social distancing can’t keep a teen and her dog from growing closer to each other. Much like Jasmine’s friendship with Dahlia, her servant, Maggie has formed a mutually empowering bond with Dahlia, her service dog in training.

Maggie and her family are no strangers to homeless pets in need. Their other four-legged family members include two cats adopted from the Humane Society nearly eight years ago. When the two were just kittens and Maggie was nine years old, the Behzadi family took both in, preventing the sibling pair from being separated. Growing up around rescue pets like these inspired Maggie to begin her search for a rescue dog to become her service animal.

Maggie’s frequent migraines and anxiety made her realize that she could benefit from such a canine companion. Adopting Dahlia and beginning her training has kept Maggie positive during this stressful public health crisis. It has even begun to help her alleviate her migraines and panic attacks, too. This is possible through “scent work”. When Maggie is having a migraine, she lets Dahlia smell her clothes, training her to associate the scent caused by chemical changes in Maggie’s body with the migraines they result in. Already, she has been able to warn Maggie during the beginning of a migraine. Dahlia is continuing this training to recognize these signs even further in advance. Besides this, Dahlia is also learning to notice when Maggie is experiencing a panic or anxiety attack so she can lead her from crowded areas into a secure space. Laying on top of Maggie when this happens is also an effective method of helping her feel safe. This is called pressure therapy. “Feeling her weight across my body helps to ground me in a way,” says Maggie. Before they could begin training Dahlia in scent work and pressure therapy, however, Dahlia and Maggie needed to bond with each other.

Dahlia is a “very shy and sweet” American Pitbull Terrier. Upon bringing her home for the first time, it didn’t take long for Maggie to realize that Dahlia had “no aggressive bone in her body”. In fact, it took some coaxing to help Dahlia break out of her shell. The first step in their joint training process was to strengthen their trust in one another. Dahlia was rescued from abuse while in a puppy mill before she came to PACC. As a result, Maggie has noticed that brooms and men tend to intimidate Dahlia and trigger her lingering fears.

Maggie has also noticed some stigma held against Dahlia because of misconceptions about her breed. She recalls another person at the vet’s office asking if Maggie was afraid to adopt Dahlia because pit bulls are such “scary animals”. Immediately, Maggie rejected the stereotypical assumption. Dahlia is a dog who likes to “hold hands” with people by gently offering them her paw, Maggie notes. She is definitely not a “scary animal”.
Tracking her progress with Dahlia on social media has helped Maggie through the training process. Sharing pictures and videos of them together began “mostly because I love her so much,” she said; but, it has evolved into a means of spreading awareness. It shows people that pit bulls can be intelligent, gentle creatures and service dogs can serve people’s “invisible disabilities”. Service dogs’ roles in aiding people with mental health issues are often overlooked. Openly documenting her experiences with this has helped Maggie increase understanding.

At the end of the day, Maggie believes that the best part of having Dahlia is watching her “act like a puppy again”. She has become “very cuddly” since beginning the recovery process from her past. Together, she and Maggie help each other overcome their struggles, raise awareness, and build a lasting friendship. If they diverge from Disney’s Jasmine and Dahlia in one key way, it’s in the fact that Maggie’s Dahlia isn’t a servant to Maggie as Dahlia is to Jasmine in the movie. Instead, she is a loyal friend and she and Maggie both serve each other. Through patient dedication, they’ve both been able to conquer anything in their way. How’s that for a fairytale, Disney?