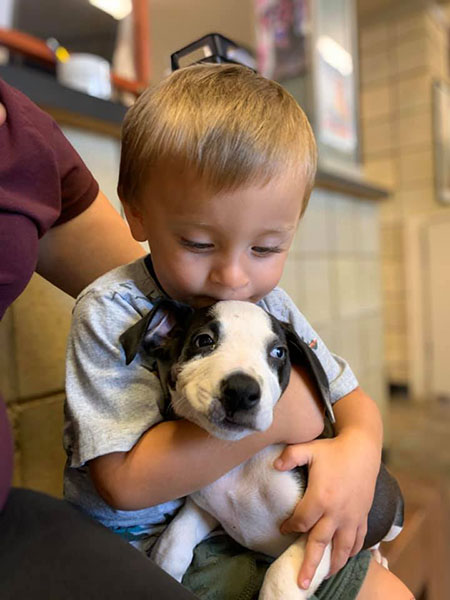 The bond between canines and humans is well established. Dogs are our best buds, faithful companions, and loyal protectors. They bring us joy, make us laugh, and ease our sorrows. They’re even responsible for the increased longevity of us upright bipeds and recognized for providing a whole host of mental and physical health benefits. As such, they are also often the bridge between young children and the harsh realities of life, making their worlds brighter and more bearable.

Recently, a story made the news of a sweet young boy and his kindred puppy for the fact they both shared the same birth defect, a cleft lip. For the 2-year-old Michigander named Bentley, it was love at first sight when his father brought home an adorable 2-month-old shelter pup suffering from the same medical malady. While Bentley has had two corrective surgeries, having someone who has shared your journey can be priceless on the road to normalcy and acceptance, especially as a child.

When his dad, Brandon Boyers, visited the Jackson County Animal Shelter and came across the puppy, he knew instinctively the pair would be a perfect fit. After Facetiming his wife Ashley about the find, she immediately exclaimed, “Get her! We need her.” She later added, “To see him have something in common with a puppy means a lot, because he can grow up and understand that he and his puppy both have something that they can share in common.”

The shelter snapped a series of heart-tugging pix showing an overjoyed Bentley cuddling and bestowing kisses on the simpatico pup. Noting “Bentley found his match today,” in a Facebook post, they continued with, “It’s so hard to put into words how meaningful this adoption is to all of us, so we are going to let the pictures speak for themselves.” And boy do they!

In nearby New Mexico back in 2015, an overwrought dog growing up in the state’s various shelters had a stroke of luck. At only 10 months old, Baxter, who’d become a quivering mess, had to be carried out of a kennel due to the noise and commotion at the busy facility before ending up at Animal Humane New Mexico (AHNM). Adoptions director Sam Blankenship said at the time, “Baxter was completely non-responsive, as he had learned to shut down rather than deal with the stimulations that were depleting his personality.”

Fortunately, Baxter’s life and circumstances improved dramatically when he was adopted by a loving family with a special-needs child named Neeva, who was 4 at the time. Neeva’s parents had been looking for a four-legged companion for her, but it couldn’t be just any dog. Neeva was born deaf, and her family wanted a dog that would be patient and gentle with her. They went to AHNM and found Baxter just waiting for somebody to bring him home to love and understand him.

Neeva communicates through American Sign language (ASL) and was limited in her interactions with the outside world. Of course, her family knows ASL, but few others do. Since Neeva and Baxter both had the same needs, in that they craved interaction and understanding, it seemed like another perfect fit.

She took it upon herself to try teaching Baxter what her signing meant, and her mother Chelsea Goff swears Baxter understands. The lovable mutt learned how to sit, stay, and go all through sign language. Neeva even gave him his very own name in ASL. For his part, Baxter has helped Neeva with her confidence, and at becoming a better signer with all of the practice the two get communicating with one another.

Goff stated, “He is such a sweet, gentle, and friendly pup and we are having so much fun with him in our ‘pack’.” Since the pair found each other they’ve become inseparable and do everything together, blossoming into happier and more fully developed versions of themselves just by being around one another.

People recovering from injuries, illness, and those dealing with depression or anxiety improve markedly with pet therapy. Therapy dogs are now deployed at airports to destress harried travelers and in court systems, through nationwide programs such as the Courthouse Dogs Foundation and Florida’s K9th Circuit Court, for calming children. A recent study in the journal Preventing Chronic Disease demonstrated that kids with dogs are less anxious than others.

Additionally, therapy dogs have even been shown to improve reading skills in children suffering from lack of confidence and/or low self-esteem. The concept of Dog Days Afternoons and Paws for Reading library programs has kids practicing their reading with animals present to listen. While initially thought “whacky,” within weeks the turnaround in behavior and reading skills was clearly evident. In 2017, it was revealed that infants exposed to higher levels of pet allergens might actually have a lower risk of developing asthma by the age of 7.

The benefits of dogs are seemingly endless.