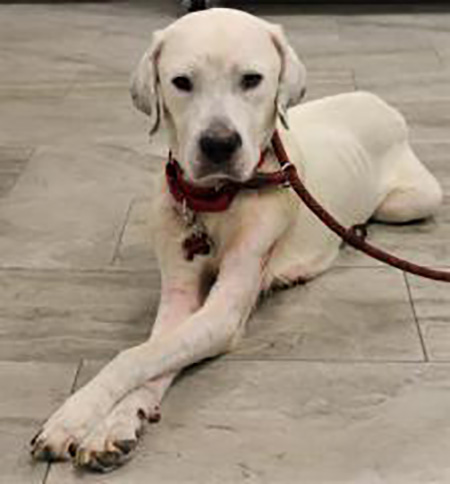 Susan Krase was working as a patrol officer for the Tucson Police Department when she received a call for a welfare check. It was March 2001. Upon arrival to the residence, Krase discovered two old Black Labs alone with their deceased owner. As per protocol, she called animal control to take the dogs to the pound. But Krase didn’t want the pups to “sit there”, so she went above and beyond, and started researching Lab rescues. Linda Wilcox, who worked for the rescue in Phoenix was willing to take the dogs.

Fast forward 18 years, Krase is the president and founding member of Southwest Oasis Labrador Rescue (SOLR). A Tucson native, Krase spent 18 years with another Lab rescue. She and several members of that group started SOLR in February of 2019. The goal was to continue to help dogs in Arizona, but to expand to Mexico, New Mexico and Texas where the need for rescuing was high. And so, Southwest Oasis Labrador Rescue was formed. Krase reports that there are now four Lab rescues out of Arizona, but they are still overloaded. Of the rescues, SOLR is the only one based out of Tucson.

Dr. Nausley, the medical director at Briarcrest at that time, was instrumental in helping the rescue get off the ground. Dr. Nausley contacted the group and connected them with a Greyhound Rescue, who took the new group under their wings. “While we were waiting for our non-profit status, Dr. Nausley treated the Labs so we could continue to save them. Meanwhile we were holding fundraisers to pay vet bills,” Krase recalled. At one point, a litter of seven puppies came in from Mexico with unidentified severe infections. Dr. Nausley was able to save five of them after hospitalization and IV fluids for the pups.

Pounds from El Paso and Las Cruses contacted SOLR for help due to a lack of resources in their area. “The ones in Mexico are really bad, they’re so beaten down, as far as medical-wise that saving them means the world to us. We can save these dogs that otherwise wouldn’t have a chance,” Krase said. The group has a heart to “do true rescues and save these dogs,” she said.

It began with one Lab

Shortly after the welfare check incident, Wilcox asked Krase to transport a pair of 9-month-old wild Chocolate Labs from the Humane Society to the Phoenix rescue. The shelter contacted the Lab rescue hoping they would take the uncontrollable pair of male pups that otherwise would have been euthanized. The two unneutered dogs had never been indoors. “Whenever anyone would come by their run, they would fly up to the top of their cage,” Krase recalled.

Then she saw him.
The puppy was standing in the doorway with an Elmo toy hanging from his mouth.

“I spent 30 seconds with him and fell absolutely in love and knew what I wanted to do – I wanted to save these Labs and adopted him instantly. This dog needed a chance and I was willing to spend every waking moment doing it. The dog was out of control, wild – the neatest dog I’ve ever owned.” Krase said. She named him Oakley. A friend and fellow officer adopted his brother. Krase, who was part of TPD’s Animal Cruelty Task Force when it started, said she was one of the “animal people” on the force. She spent 2 years as an officer in Oakland CA, and 9 years with TPD. Krase retired due to an on-the-job injury. Lucky dogs.

SOLR currently has 12 Labs and several on the list waiting to come in. It has saved 34 dogs since getting its 501c3 status. The rescue has five foster homes that care for the dogs who presently are all in medical need. The dogs are given medical attention and any necessary training before they are available for adoption. Medical conditions range from Gracie who came in with severe Valley Fever, skin lesions, and malnutrition, to 8-month-old Arlo who had been attacked by another animal.

JoAnn Rolf, a retired legal secretary and lunch lady, is fostering Arlo. “We don’t just take in perfect dogs. You can’t save the world, but you can save the one in front of you,” she said. Rolf fosters, does intake, and takes photos for SOLR. “I like the ones that people say are too damaged. Love does conquer all,” she said.

SOLR needs help from the community. They are looking for donations, volunteers to help at events and foster families. But Krase emphasized that not all volunteer work is directly with the dogs. People are needed with computer skills, administrative experience, and for transportation too.

“It’s been my life, it’s been my heart and soul, being able to save these dogs, being able to see where they go for homes and staying connected with the adopters that have had them over the years and hearing the stories about them,” Krase said. “It just takes your heart. It takes your heart when they come in , especially when they are broken, so when you get to take care of them and provide them the medical care they need, and send them on their way to a great life, it really does take a piece of you,” Krase explained. “If it wasn’t for him (Oakley), I don’t think I’d have done as much as I did for the rescue. He changed me,” Krase confessed.