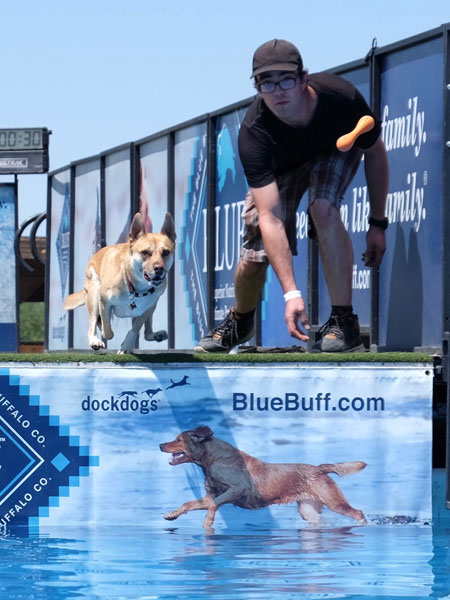 Old Tucson Studios said Goodbye to the Dog Days of Summer with their 3rd annual Dock Dogs diving event. The spectacular, that was held over the Labor Day Weekend, attracted dogs, owners, and onlookers from Tucson and across the nation.

But for one dog, it all started in a backyard pool. Casey Fitzpatrick was swimming with his family at his parent’s house when his newly adopted pup started running along the edge of the pool barking at them. “We all just started calling her name and splashing the water and she hopped right in,” Fitzpatrick explained. She was about a year old at the time.

The five-year-old now has a 13.7-foot jump under her belt, or collar as it were.
And, she’s a rescue from Tucson.

That jump last August launched Ellie Roo from the amateur to the contender division this year.

Elli Roo’s first jump this year was 12.1 feet. Her second attempt was 9.8 ft. But she’s just out here to cool off and have fun.

Fitzpatrick had grown up with dogs. They were always a part of his life. So, when he moved out of his parent’s house and into a home of his own, getting a dog seemed like the natural thing to do. It took several visits to the Humane Society of Southern Arizona to find that special connection. “One day I went in and I saw Ellie and just fell in love with her,” Fitzpatrick recalled.

Prior to being rescued, the Dock Diving Champion had been hit by a car that left a road rash scar on one side, and broken leg at the shoulder and elbow on the other. By the time she was taken to the shelter, it had already healed in the wrong position. The vet told Fitzpatrick that his dog would always have a limp. “When I adopted her, her name was Ellie, but she kind of has a bum front leg so she hops around. So, I started calling her Roo, and then Ellie Roo and it stuck with her,” Fitzpatrick swooned. “It doesn’t slow her down too much,” Fitzpatrick added.

Ellie Roo was about 7 months old when Fitzpatrick took her home. Adoption fees were waived due to the extent of her injuries. He was told there was a 50/50 chance his new pup would need to have her leg amputated. “It would be a $1,000 surgery but I was willing to do all that for her ‘cause she’s a good dog,” Fitzpatrick said. Fortunately, that did not happen.

Elli Roo wasn’t the only rescue at the diving event. Otis from Central Arizona Animal Rescue found his forever home with Old Tucson marketing coordinator Megan Litwicki. “I decided I needed to adopt a new furry friend,” Litwicki said. She has one cat but has never owned a dog before. “There was something about him. He was very cute, but also he’s just so calm and sweet, and almost kind of catlike that I just had to have him,” she continued.

Fitzpatrick had no intention of finding a dog to enter in any type of sporting competition. Basic obedience classes were about as much training as he had anticipated. “It [dock diving] just worked out that way. I was just looking for a companion-type dog,” Fitzpatrick said. “When I got her, she turned out to be a big swimmer. My mom had heard of the Dock Dogs through Facebook. So, we went there our first year and she had a blast with it, so we’ve been doing it the last couple of years.”

Fitzpatrick taught Elli Roo where to find the stairs out of concern that she wouldn’t be able to crawl out of the pool due to her injuries. Now she’ll jump in by herself and swim laps in the pool. The champion has no formal training regimen. “We just go to swim and have a good time,” Fitzpatrick said. The pair swim in pools owned by family or friends. Fitzpatrick had no idea that Ellie Roo would be so good at Dock diving. “I took her up there [the diving dock] and she was a natural. No fear of jumping off the dock, she was just excited to go,” Fitzpatrick said.

“Since she had her basic obedience down, it was easy to set up, I just put her in a sit-stay at the end of the dock, I walked down to where the jumping-off point would be, and then I released her and I threw the toy into the pool and she just jumped – no hesitation. I don’t even think she looked down to see the drop. And then she’s happy to get back in line and go again and again,” Fitzpatrick said.

After two jumps Ellie Roo was done for the day. She returned on Labor Day to play in the water and socialize.

“We just go out there to jump and have fun and see all the other dogs. It’s great seeing the people from the years prior that are rooting her on,” Fitzpatrick smiled.

Is Your Dog A Barkaholic? 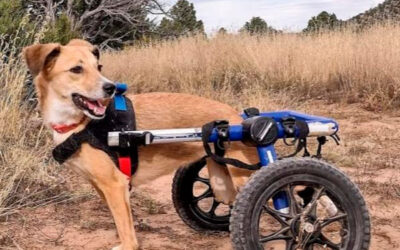 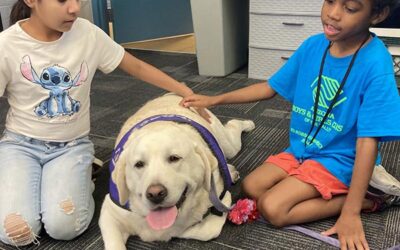 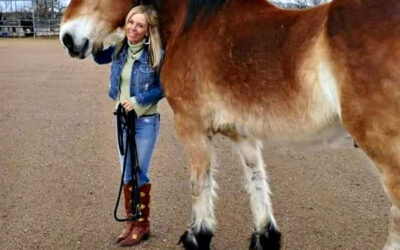