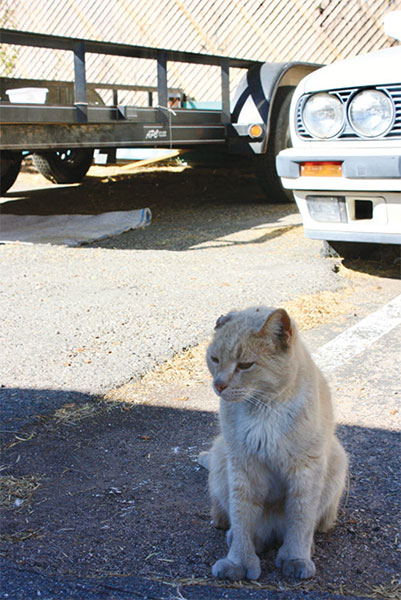 There are a lot of cats in Tucson. Kind souls and shelters take in as many as they can, still more remain outdoors. Advocates here, particularly those at Tucson Feral TNR Advocates, agree that Trap-Neuter-Return (TNR) is what helps animals and people most. Here is an alphabet break down of this modern philosophy and method so that the rest of us understand:

Altering, also known as fixing, spaying or neutering. Altering cats that live on the street stops them from adding to overpopulation. Taking these cats to shelters can be a gamble and may be unsustainable. Euthanizing them may be inhumane and pointless if more will come and take their place.

Borrowing humane traps lets a neighborhood manage TNR on their own. Tucson Feral TNR Advocates provide information of where to go in town to find traps on their website.

Community cats are cats that roam free outside. When they find a place that’s good for them and safe, they make home there. Most don’t miss the indoor lifestyle.

Deterrents hold cats away from people who don’t want them near. Things like motion-sensor sprinklers, closing dumpster lids, or boarding up hideaway spots work better at keeping the animals away than physical removing them.

Ear tipping marks cats that have already been fixed, so they don’t get hassled into being taken in twice.

Feeding community cats is an easy way to improve their lives and interact with them. However, a fed cat is a healthy cat, and one that will have kittens. So if you’re going to do that, take responsibility for getting them fixed.

“Greetings,” meows a fixed outdoor cat, Vince, looking up from his food bowl as a customer goes past him into the store.

Hidden shadow of a kitty in a front yard garden. Her view of the world is different. She walks pathways behind fences. Now, atop the outer wall.

Inside cats and outdoor cats shouldn’t mingle because feline diseases might spread. Even if you don’t have any other pets, the outdoor cat may not want to live inside.

Jump on board. Putting up an outdoor shelter that’s safe and weatherproof, along with food and water, can be an alternative to adopting a feral cat.

Kittens shouldn’t be trapped or taken in if they’re young. They’re better off with their mother and can’t be fixed until they’re a couple months old anyway. Even if they’re alone, keep an eye on them from a distance, their mother may be running errands.

Mild climate most of the year means cats tend to make Tucson their home for longer periods of time.

Nearby, in a church parking lot, live a mother cat and her kittens.

Outreach lets the folks in a neighborhood, apartment complex, or workplace, wherever the community cats may be, function as a team. A discussion early on about what can be done prevents confusion, and spreads awareness about a topic where modern ideas about what’s right have changed before.

Pima County Animal Care Center has made its community cat program more local in 2018. PACC’s contract with the Best Friends Animal Society, an organization that helped start the program in 2014, ended last year.

Questions are important. Tucson Feral TNR Advocates is a place to find answers about feral cats. They list Alley Cat Allies, a larger cat advocacy network, as a further resource for learning.

Returning altered cats to where they were trapped is the law in Pima County. Relocating them is abandoning them. Abandoning them is illegal, and it is not good for anybody.

Strays are community cats that are friendly to people. Sometimes strays find homes after being brought into a shelter, but more often, there are more strays than for the shelters can house.

Territorial behavior leads cats to spread out, filling the spaces that have resources to support them. Unlike strays, feral cats are not friendly, and they don’t want to be pets.

Under the shade and with plenty of water, an outdoor cat survives a day in the heat of the summer in Tucson.

Volunteers sustain TNR programs and look out for community cats.

Wildlife biodiversity is affected by feral cats. Cats are included in statistics about bird populations dying. They take the blame, even when cats are the result of people living in a place.

(e)Xaminations help feral cats get treatment for infections or injuries and improve their lives. Tests for FeLV (feline leukemia virus) or FIV (feline immunodeficiency virus), however, if positive, may keep some from letting the cats continue to live.

You can still show your love for a scaredy cat, in ways that don’t involve getting too close.

Zero cats, a number to work toward. After almost 1,300 feral cats were euthanized at PACC in 2013, in 2014 the Pima County Board of Supervisors unanimously voted to change to the law and allow for TNR. Now, significantly fewer cats are being euthanized.

Horsin’ Around: Angels in Autism: Healing the Hearts of Humans and Horses