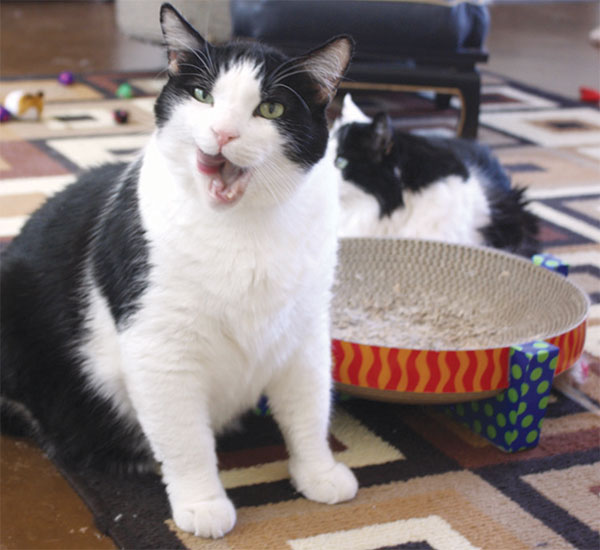 A Special Place For Cats: Hearts That Purr Feline Guardians

Story and Photo by Devon Confrey

Fear not the rocking chair, for it will become a scratching post in a nursing home for cats. Hearts That Purr Feline Guardians has recently become such a place, where a few cats can go, permitting space, for end of life sanctuary. For a donation, the cats are cared for after their owners are no longer able to be their pet parents.

The small organization operates with a personal touch that larger shelters can’t. For older cats, who may be in mourning and shock, and whose general health decline may get overlooked, this special attention makes a difference.

Around 20 resident cats occupy different rooms that snake along the 5-acre property, separated by family, and diet, and by who gets along with who without too much growling.

Brothers Hewey and Tudley always stick together, and the same with siblings Foxy, Munchy and Thelma. Gizmo walks all around. Peyton, Pompon, Calico, and Minou enjoy each other’s company as long as they have enough space. Duchess can’t hear well and doesn’t play nice, but she likes looking in at others through the door.

Before Hearts That Purr agrees to take in a cat from an owner, they gather information about how that owner would take care of them if they were still around, including favorite toys, when and what and how much they’re usually fed, and what gets on their nerves.

About half the cats come to Hearts That Purr this way. The rest are rescues from shelters where they otherwise wouldn’t fare well. In total, 11 cats moved in last year.

In all the rooms the AC blows, and a radio plays quietly, or a large window offers a view of birds or the mountain. Books and art about cats line the walls, and toys are all over the floor. After lunch on a Sunday, all the cats were a little sleepy.

Jeanmarie Schiller-McGinnis, Hearts That Purr’s founder, poured out some cat treats for a new intake, JJ, to see if the “cookies” would entice him to come out from the tree where he was hiding. As he crawled out, she said that he likes these, even if they’re not great for his diet, that they may improve his quality of life, and that he may need that extra mass down the line.

“That is our goal, to make this feel like home for them,” Schiller-McGinnis said.

Notepads that keep track of each cat are organized on the kitchen counter in a line, along with their medications. Weigh-ins and vet trips are logged. The caretakers that work here come to know the cats personally.
Some cats are adopted out to suitable homes that promise they’ll love the senior kitty for all the time they’ve got left. For a lot of the cats taken in, Hearts That Purr is their last home.

“If I can give them more days that are good days, then I will,” Schiller-McGinnis said. The organization is supported by volunteers and runs on donations.

Schiller-McGinnis took in the first cats and began the organization in March of 2014, after looking for a place she’d want to leave her own three, sometimes difficult cats if she and her husband were to suddenly become incapable of care, taking her experience with her of having done work in the nonprofit animal shelter world.

“If I can’t find a place, I’m going to create one,” Schiller-McGinnis said.

Hearts That Purr pairs 17 of their cats with people over 55 who would like to live with and take care of a cat but may not want to adopt their own in case they can’t always commit to being there for the pet.

Schiller-McGinnis said that she doesn’t plan on scaling up Hearts That Purr to house more cats, but she hopes that the organization can serve as a model for others across the country, for when family and friends aren’t able or willing to take in new cats.

“For somebody to say we found a home for all the cats, it’s a huge relief,” she said.

One owner waited to move on to a final hospice until she could find a home where her four cats could stay together. Another owner died, and their cat ended up at a shelter, without anyone knowing its name before Schiller-McGinnis did some digging and found their address and talked with a neighbor. A few owners had plans in their wills for how to proceed with their pets after they had passed.

“People don’t know how much people care for their animals,” Schiller-McGinnis said. The bond may be an intimate part of person’s life that they may not share publicly with everyone.

Some owners leave things behind to be left with the cats, like photographs, or beds or toys. One left a chair that the cat liked to lay on. Another, an urn with ashes.

Cover Story: How Green Is Your Valley? For The Animals at The Animal League of Green Valley the Grass is Greener