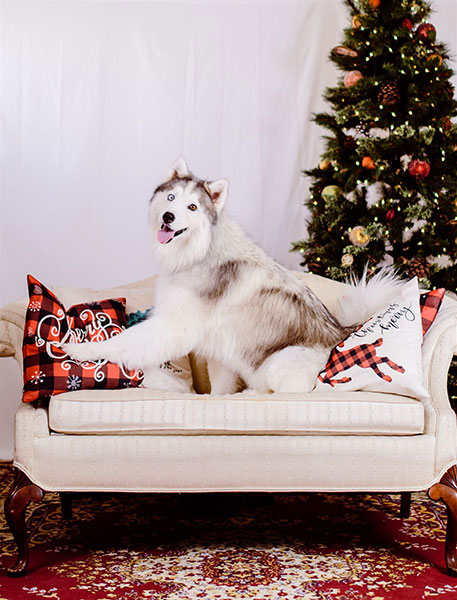 Here they are, the fabulous winners of our 2nd Annual Holiday Cover Dog Contest! This year’s participation level was phenomenal, with 50 contestants entered, and we couldn’t have been more excited with the amazing turnout and fantastic images everyone provided. It was extremely tough to narrow it down to just three, but here they are!

Before we get to them, it’s important to note that all three of the families that made a home for these lovable rescue dogs wanted to share with readers the importance of adopting and the impact it’s had not only on the boffo doggos but the families themselves, adding that the experience has changed all of their lives for the better. Their message: adopt, don’t shop!

Meet Anastasia, a beautiful 7-year-old husky/malamute mix whose pregnant mum was rescued from a notorious puppy mill back in 2013. Her pet parents Tommy and Susan Ross, adopted her shortly after she was born. Susan, who works at a local veterinarian office, came into contact with Ana, as she’s often referred to, when she was brought in with her sled-dog mom and siblings for a checkup. The woman who’d adopted her mentioned that she was trying to find homes for the pups, as she’d been unaware the dog was pregnant at the time of her rescue.

A tiny little powder puff of a dog resembling a small stuffed animal, Ana got a brand-new mom and dad to dote on her and love her from that day forward. Initially introduced into a home with three cats, she gets along beautifully with other pets, including the three other rescue dogs the couple eventually adopted. Ana had some training from an animal behavioralist at Tucson’s Animal Magnetism, and she’s a well-adjusted girl with a lot of personality now.

Besides being fond of hiking, walks, and dog parks, she adores trips to the mountains, playing in snow, and camping. The talented Anastasia also enjoys singing an a cappella version of “I Love You” and is known for doing a mean impression of Elvis a la “Hunka Hunka Burning Love” with an uncanny facial sneer similar to that of “the king” himself. In fact, one of her favorite things to do is to run outside and stand on the edge of a raised flowerbed next to the patio wall, fling her paws on top, and serenading passersby with her own brand of music. The melodies have made her quite popular in the neighborhood.

She’s super friendly with a wonderful demeanor, so it’s no surprise she loves to give kisses and curl up with the family cat Marlo for naps when she’s not catching 40 winks outside in the shade. Other favorite pastimes include eating roast turkey or chicken breasts from Trader Joe’s, Sprouts, or Costco, but her parents try to limit her intake to healthy portions.

Another treat is going to the groomer to have her luxurious locks sorted out after staining her thick coat on the red gravel in the family’s yard. While a lot of dogs merely tolerate it, Ana LOVES the royal treatment she gets at Bark Avenue Dogwash, where she’s primped and pampered. As a matter of fact, Bark Avenue is where Ana went to “have her hair done” right before her parents coaxed her into modeling her holiday look for the camera. The business obviously did a terrific job, as she was voted 1st place winner.

Jason McCoy, of The Real McCoy Photography, recalled the day he and his adorable wire-haired terrier rescue Chawlie first met. A photographer for Arizona Small Dog Rescue, one Saturday he and his partner were headed to work to do a photoshoot when they stopped at a red light. While idling in traffic, the car in front of them opened their door and tossed Chawlie out, “with a little force,” McCoy added. Stunned, they were faced with the choice of either chasing the vehicle down and possibly getting involved in something that could lead to trouble, or stop and help this scared little dog that appeared to be a puppy.

So, after Chawlie they went. He was completely terrified, shaking, and filthy dirty. After backing him into a corner, Jason went to scoop him up when the dog bit him. He was estimated to be only 6-8 weeks old and his teeth were barely visible, so it didn’t hurt him at all. Jason just didn’t want him to run into traffic. Since he bit him, they decided to name him Chawlie (with an English accent) after the “Ouch, Charlie Bit My Finger” video.

It took the dog a minute or so to open up, but they had him checked out at the vet, where they discovered he had no microchip, and thankfully no broken bones. Just some bruising and a couple of lacerations that were treated and bandaged. The results indicated that he might have been abused. Initially, they weren’t going to keep him, because they already had three other rescues, but they quickly fell in love with Chawlie and their other dogs did, too.

Nowadays, he is the perfect addition to their family and is the most loving dog ever, being described as a “cuddle bug.”

Cali, short for California, where her pet parents Trissina and Dave Kear lived prior to moving to Tucson, is a cute 2 ½-year-old rescue discovered about a year ago during a PACC special adoption event. The sweet little pup was very shy and not coming up to anyone at their first meeting, but when Dave went to a kennel area with her, she came alive and bonded with him. Inhibited, Cali didn’t even know how to play with toys when he brought her home, and the picture used in the Cover Dog contest depicts the very first time she knew she could actually play with a toy.

She appears to be a Doberman/Lab mix with perhaps a bit of Rottweiler thrown in, but no one knows for sure. A big fan of constant petting and attention, she loves to cuddle and drape her paw across her parents’ tummies when she snuggles up to them. Now that she’s coming out of her shell, she’s a tad mischievous. Her favorite pastime is to wait for the garbage truck. Hearing it coming off in the distance, she dashes outside and runs in circles barking, creating a huge cloud of dust in the process. 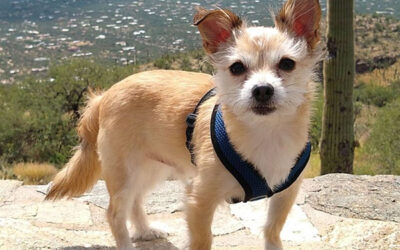 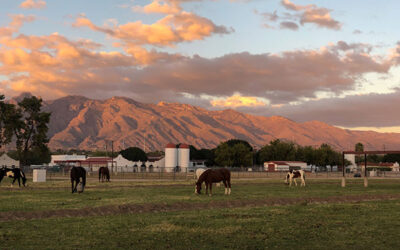 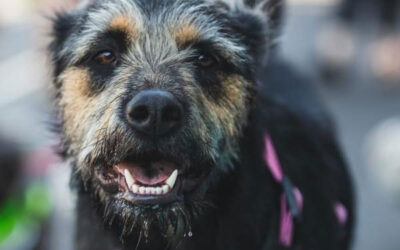