Doggie News From Around the World 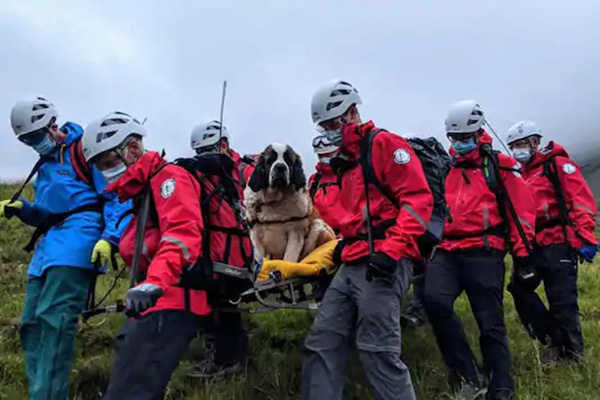 You cannot blame a dog for trying—and certainly not when they sound super cute. “My significant other and I had been trying to teach our dog to make less of a mess in our house—specifically, to not pull toilet paper off the roll,” wrote Reddit user ringofstones. “We weren’t sure we’d been making any headway until one day we came home to find that while we’d been out, about two feet of toilet paper had been unrolled…and then somehow rolled back up sloppily. All I can imagine is her playing with it happily, hearing us at the door, thinking, ‘Oh, crap!’ and trying to fix her mess. It was actually pretty impressive.”

“I had a dog that liked to lick the built-up ice in the freezer every time we opened the door,” Reddit user Pondglow wrote. “Got his tongue stuck regularly. Always went back for more.” But that’s is not even the hilarious part.

“The first time we took him to a lake, he got so excited that he just ran in without knowing what it was. ‘Oh, water!’ Okay, not phased. Keeps running toward the middle. We thought he would start to swim. Or at least float. Still, don’t understand how he didn’t. But he ran along the bottom of that lake and just disappeared under the water. … My dad had to go in and carry him out.”

When Reddit user opkc changed her afternoon routine once, her dog was not having it. “My dog, Libby, rides with me to pick up my kids from school, and she knows exactly what time we leave. The kids had an after-school activity, so I needed to pick them up an hour later than usual. When we didn’t leave at the normal time, she started whining at me. Then barking. Then she swatted my shoe with her paw, hard, so it flew and hit me. She threw my shoe at me!” Libby sounds like a Real Dogwife of New Jersey.

Most dogs would do absolutely anything to avoid the hail, but not Reddit user choirboy17’s pup. “The first month I had my dog, Howie, we had a pretty bad hailstorm,” Howie’s owner wrote.
“As soon as it started, I went outside to call him in. … He ran around for the entirety of the hailstorm trying to dodge the hail, not listening to my command to come inside. He just ran around for 10 minutes and yelped every now and again when a hailstone caught him the right way. Even after it was over, he would not come inside. I didn’t know whether to laugh or cry.”

The 121-pound pooch feels “a bit guilty” for letting down the image of her St. Bernard cousins, her rescuers joked.

Daisy the St. Bernard is apparently feeling a little “embarrassed” after she was the subject of a five-hour rescue mission during her descent from England’s highest peak, according to her rescuers.

The 121-pound pooch comes from a working breed that has, for centuries, been known for its prowess in alpine rescues. But on this occasion, it was Daisy who needed saving, after she collapsed while descending from the summit of Scafell Pike in England’s northwest on Friday during a hike with her owners. She was displaying signs of pain in her rear legs and refusing to move, the Wasdale Mountain Rescue Team said in a Facebook post about the mission.

After Daisy’s owners contacted authorities, a 16-person rescue team was mobilized to help bring her to safety, armed with medical guidance from local veterinarians.

“On reaching their location, team members carefully introduced themselves to Daisy so as not to cause any additional distress, and with the help of a treat or two members were able to assess her condition and administer analgesia for the pain,” the group wrote.

After “a little persuasion,” some more treats and rearrangement of a stretcher to be more dog-friendly, the rescue team said they were able to carry the St. Bernard down the mountain on a rescue litter, similar to the typical evacuation of an adult person.

Thanks to the cooperation of Daisy, who was “so well behaved” throughout the process, the rescue went smoothly. She “has since been reported to have had a good night’s sleep, snoring a little louder than normal, but back to her usual high spirits this morning,” the rescue group said.

Traveling Miles to Repair a Smile