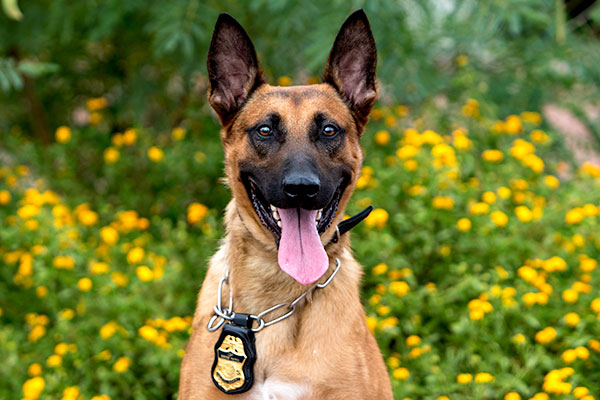 The dogs that serve with the nation’s Customs and Border Protection (CBP) agents are a diverse and talented group of animals. In what is probably the most diversely trained K9 force in the nation, these hard-working pups spend their day serving in multiple roles alongside their human handlers securing the border, locating illicit narcotics, and even saving lives.

The dogs of Custom and Border Protection serve in multiple roles. All the dogs are trained in one of three specific primary disciplines: human and narcotics detection, search and rescue, and patrol duties. In addition to these primary roles, each of the dogs can then be trained in a secondary discipline such as tracking and trailing, or human remains detection (often referred to as cadaver dogs). These multiple training disciplines make them unique among law enforcement programs. The CBP’s training program creates K9s that are capable and effective and enable the agency to more effectively carry out their duties.

Agent Paul Dubois is a Special Operations Supervisor for the Tucson Sector of CBP and is one of the lead canine supervisors. “We are different from law enforcement K9 programs generally speaking because of the way our dogs are used operationally,” Dubois said. With the multiple roles that their dogs perform daily, the dogs of CBP are a unique group with diverse and specialized abilities, abilities that may not be necessary for many other law enforcement agencies but are essential for CBP.

The dogs’ safety is a top priority for their K9 handlers. As an example of one of the ways the handlers ensure their dogs’ safety, if a dog is deployed in the lanes of a checkpoint facility, the dog might spend twenty minutes performing their duties. Then another dog rotates in, relieving the first dog so they can spend some time recovering, cooling down, and hydrating for their next assignment. The dogs also get regular medical checkups to ensure that they are physically fit to perform their duties.

Dubois says that as agents it is their duty to look out for the interest of their dogs and be attuned to how they are feeling. Dubois said, “all of our handlers are very well trained at taking core temperatures and taking the vitals on the dogs,” whether they are at a checkpoint or out on the track performing field operations.

One might wonder how these dogs do in the hot desert sun while they are performing their daily activities, especially during the summer months when temperatures can dwell over the 100-degree mark. Dubois states that dogs have a natural acclimation period just like humans do. Building up a dog’s tolerance to the heat is something that resembles a human’s. Once the body acclimates and gets used to the heat, the body adjusts and can operate in extreme temperatures very well. Physical conditioning and diet also play a role in the dogs’ ability to perform in the heat. Additionally, when the agents and dogs are in the field, they tend to not drive around with air-conditioning on in their vehicles. The constant climactic change of stepping in and out of an air-conditioned vehicle multiple times a day can be stressful on the body’s ability to regulate its own temperature. So, both the agents and the dogs make a point to get used to the heat, seeking shade when necessary, limiting their exposure time, and always carrying plenty of water for themselves.

One of the hardest duties that CBP’s K9s perform is human remains detection. Many individuals who undertake the arduous journey northward into the United States don’t make it through.Often, they are reported missing and it is up to the CBP’s dogs trained in human remains detection to locate them. Dubois states, “as difficult of a situation as that is, it is bringing closure to a very tragic event.” And closure is something that can be so important to the family members of the deceased.

Dubois describes their K9 units as indispensable to the duties that CBP performs. “Our agency really looks at these dogs as limited assets, but they are force multipliers,” Dubois stated. Their specially trained dogs can minimize the time that agents need to spend on-scene. Humans have limited senses, especially olfactorily-speaking. But because dog’s olfactory senses are so sensitive, they can locate people and objects with relative ease. This is especially important when the people being tracked may be in distress or may be injured. With the ability to locate people across what might be miles of open desert, or might be hidden in cramped spaces inside cars or shipping containers during the scorching hot summer heat, the dogs of CBP can save hundreds of lives every year. And saving lives is one of the things that the agents and handlers of CBP are most proud of.