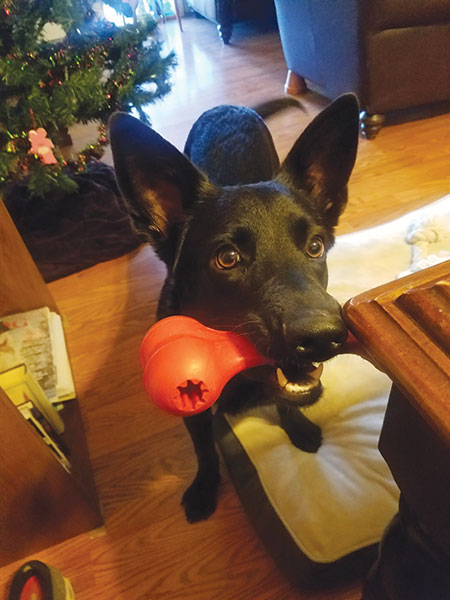 After years of writing for the Tucson Dog, staff writer gets dog of her own, and finds joy and connection during the pandemic.

My boyfriend and I have been talking about getting a dog since before we moved in together 3.5 years ago.

At first, we’d wanted to make sure we enjoyed living with each other before bringing another living being into the mix. Then it was that our apartment didn’t allow dogs. When we moved to a dog-friendly place, I felt bad that we’d leave the dog home alone all day while we were at work, and he worried about how we didn’t have a fenced yard. We might want to move out of the country someday and bringing a dog along would be difficult.

We had a lot of excuses, but when we added them all together, we were left with the simple fact that we were scared. A dog is a big responsibility, and we didn’t want to mess it up.

In 2020, we saw with a whole new sense of clarity that there were much, much bigger things to be afraid of. I started working from home full-time, so concerns about leaving the dog alone in the house, at least for the time being, were moot. As the COVID-19 pandemic dragged on, it seemed more and more like the time was right – not just because the logistics were lining up, but because the comfort of a furry companion sounded more appealing than ever.

When we got an email from Pima Animal Care Center about an urgent need for dog fosters, I felt like it was a sign. On November 1st, we walked into the shelter to see who was available and walked out with Zelda, a 1.5-year-old shepherd mix who was as black as night and had been picked up as a stray. She’d been having a hard time getting comfortable in the shelter and was taking anti-anxiety medication. I struggle with anxiety myself, so I couldn’t help but giggle at the thought of Zelda and I home alone together, worrying all day.

While Zelda was anxious her first couple of days at our house, she grew comfortable almost as quickly as we grew to love her. No fewer than four people reached out to us about adopting her within a week. In the end, of course, we decided to keep her.

Zelda has enormous ears that seem to remain at attention even when she’s asleep. She knows how to sit, lay down, and roll over onto her back. When she’s excited in the morning, sometimes her tail wags so hard against the bookshelf next to our bed that the sound wakes me up.

On one of our first walks, Zelda and a Pomeranian, who was walking by with her owner, started straining at their leashes to greet one another. I warned the woman I wasn’t sure exactly how Zelda did with other dogs, because I’d only had her since the day before.
We cautiously let Zelda and the Pomeranian, whose name turned out to be Leia (both named after princesses!) approach one another, and I said a silent prayer that Zelda wouldn’t bite the Pomeranian’s head off. It was answered. They touched noses, looking something like a sweet little canine version of The Creation of Adam.

I was so excited and proud that Zelda had made (and not mauled) a new neighbor friend, that it wasn’t until later that it hit me how nice it had felt for me, too. I couldn’t remember the last time I’d approached one of my neighbors to chat. Having a dog felt like some sort of superpower that allowed me to go up and make conversation (from a safe distance) with all sorts of new people.

An added benefit? In dog neighbor world, no one seems to expect you to remember their names, because everyone just remembers each other by their dogs’ names anyway. “Hi Zelda!” the owner of the pit mix from down the street will say. “Zelda’s so excited to see Molly!” I’ll call in response.

Our little social butterfly has made several friends in the neighborhood: There’s Molly and Bentley from down the block, who would chase after balls together forever, if we let them. There’s Bear from next door, who is so enormous that I suspect he might actually be a bear, and whom Zelda seems to fear and idolize equally, like a little girl does her older brother. And then there are her most frequent playmates: Fiona and Vinnie, a husky mix and a miniature Australian border collie. They live one building over, and Zelda and I stop by so often that I actually remember their owner’s name too (it’s Jessa).

When we got a dog, we didn’t just get a brown-eyed, big-eared goofball who plays a mean game of tug-o-war and is a world-class snuggler. We got all of the friends – canine and human – that she was brave enough to introduce us to. And during a pandemic, no less! Thank goodness for dogs. 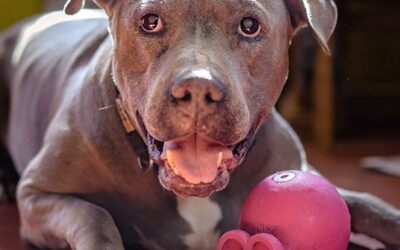 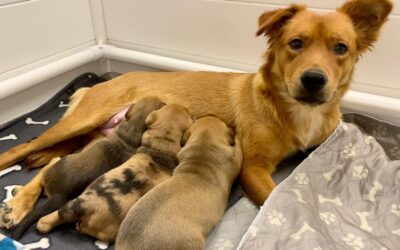