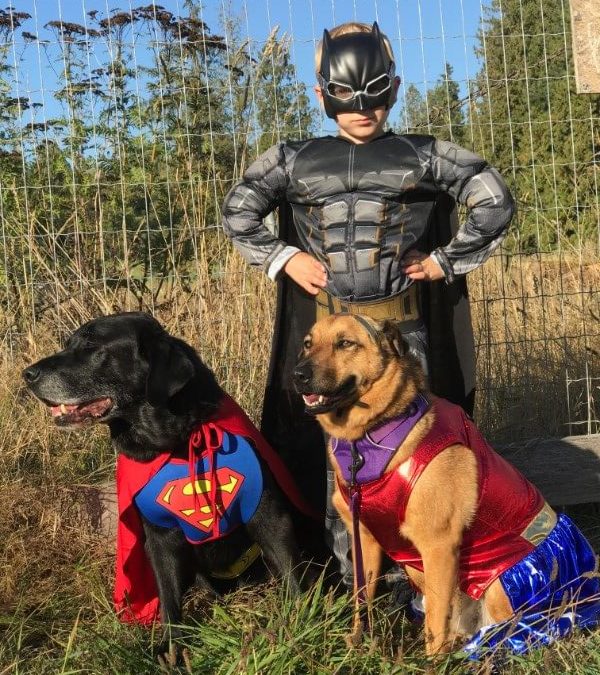 Who is your favorite superhero? If you ask six year-old Roman, it’s Batman. If you ask hundreds of dogs (and even cats) around the country, it’s Roman. This is because Roman and his family have dedicated themselves to rescuing pets from shelters in Texas that use euthanasia to prevent overcrowding. Roman believes that every dog deserves a loving home, and since the age of four, he has been fighting towards his mission to give them all this opportunity. Roman currently lives in Washington, but this hasn’t stopped him and his family from striving to find homes for animals in Texas. Over six hundred dogs have Roman and Jennifer McConn (his mom) to thank for the wagging tails and loving families that they have today.

In 2016, Jennifer McConn founded Project Freedom Ride, the nonprofit, which rescues dogs and cats fated for euthanasia from Texas shelters, and places them with adopters. This is where Roman comes in. Taking after his mom, Roman created his own branch of Project Freedom Ride: Roman’s Rescues. His job is to call out the names of the pets and their new families at the Direct Adopt events where the family and animal finally meet for the first time. Through Direct Adopt, rescued dogs and cats are viewed online and claimed by adopters searching for their future best friend.

Once potential owners undergo a full screening process, their family’s newest addition will be flown to the Direct Adopt events in Washington, where they are united for the first time by Roman’s Rescues and Project Freedom Ride. In addition to saving lives and creating lifelong companionships in this way, Roman’s Rescues also creates videos to spread awareness about specific animals in immediate need of a community’s help, or just those still seeking a home. Roman enjoyed creating one such video for a dog named Chopper. With the help of his mom’s video editing skills, he animated Chopper’s mouth to move with Roman’s voiceover, allowing the dog’s playful personality to shine through Roman’s creative interpretation. This particular video was featured on local news. His other videos have been known to go viral on multiple media platforms. Roman has successfully mastered the superpower of speaking out for those who can only bark, and spreading the word to unite the whole nation for a good cause.

At home, Roman is not your average six year-old either. How many parents can honestly say that their children keep promises to be responsible for their pets? Well, Roman’s mom can! Roman currently has one dog, a playful Heeler named Rue. His family also opens their home to fosters such as Luna, a deaf Heeler. Roman loves to play games like chase with Rue and Luna, and he also takes great responsibility for their care. Roman feeds and walks the dogs; he loves to take them to the dog park with his mom. Roman’s favorite breed is the Labrador because he had one incredible Lab named Bubba for his entire life. Roman’s mom describes Bubba as Roman’s “brother.” Bubba passed away in early March of this year, at 14 years old. He had some health issues over the years, but Bubba was lucky enough to live with a family that never left him behind, despite the difficulties of being a frequently moving military family. Dogs are as much a part of the family to Roman as any other member.

Roman can recall the names of just about every foster and rescue animal that he has helped in his life. He can describe the animal’s background story and appearance, and give you an update on the animal’s life now. From Minnie and Moose (named after their contrasting sizes) to Baby and Mama, Roman never forgets a life he has saved. Roman’s biggest wish is for every dog to be in a home. It will take some seriously hard work to make this dream a reality, but, luckily, Roman’s dedication thus far has proven that this hero is up for the challenge.

Even a superhero needs some time off! When he’s not saving the day, Roman enjoys playing board games with his family, swinging, jump roping, catching leprechauns, and painting dot art. Most of all, he is ecstatic about this summer and attending first grade next year. Roman’s favorite game to play with his family is Watch Your Mouth, a game where the players have to understand phrases said by a partner while that person’s mouth is being held open by a plastic insert. The game was extra funny when Roman played with his grandmother since her plastic mouthpiece kept making her teeth fall out! Roman is not currently enrolled in a sport, which is why he enjoys burning off his energy on the swing set or jumping rope. He loves P.E. class because he gets to play ‘helicopter’ with the jump rope, a game he also hopes to play with his family in the future. Roman cannot wait to play coach pitch ball this summer with his friend, Wyatt.

This past March was quite busy for Roman who found himself on the lookout for pesky leprechauns that had made a mess of his classroom, broken his teacher’s chair, and even caused a ruckus in his own home. Currently, Roman is learning the letters of the alphabet in school.

He mostly looks forward to art class because that is where he gets to make dot art. This technique involves dipping Q-Tips in paint and dabbing them on paper in different designs to eventually create a big picture. This can be a very time consuming task, though. After all, it took Roman “fifteen whole minutes” to finish the green dots alone! Roman’s favorite food is homemade sloppy joes, but spaghetti and Ramen are close seconds. He also enjoys Halloween and has dressed up as Batman a few times. Luckily for us, Roman is as much a superhero out of costume, as he is in costume.

When Roman grows up, he wants to create the first-ever Navy for dogs, equipped with canine-friendly airplanes and ships. Roman also wants to be in the Navy, just like his dad. Marvel and DC comics are pretty incredible, but Roman is the first superhero I have met who wants to spend his life enabling the creatures he has saved to become heroes themselves. Roman wishes to take after his dad and become a hero for his country, all while still being a hero for animals. Now, pets and humans alike can rest assured that we are in good hands. Roman certainly passes the superhero test with flying colors. If Batman ever needs a helper (one who may even upstage him), we know whom to call. In the meantime, Roman wants you to know, “I can only say that I’m going to keep helping dogs!”