Special Feature: Ashley: Changing a Life for the Better 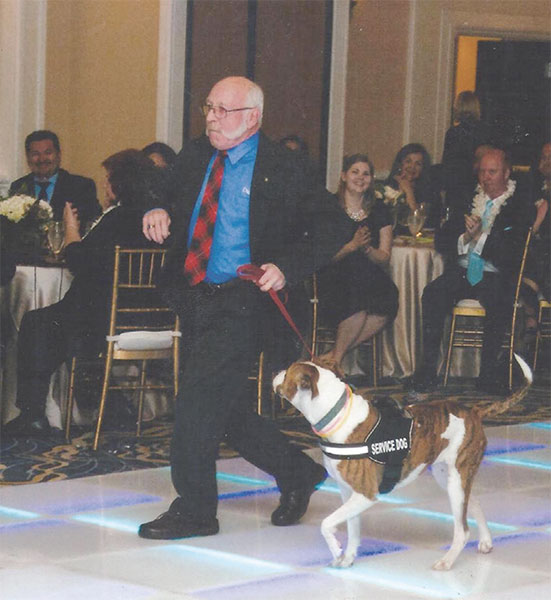 Ashley: Changing a Life for the Better

Henry Johnson served as a Vietnam-era Marine from 1975 – 1981. Tragically, like so many other servicemen and women, the battle continued for Henry as he suffers from Post-Traumatic Stress Disorder (PTSD).

Unimaginable nightmares, paranoia, and a fear of crowds plagued Henry for decades, at times rendering it difficult for him to navigate daily life.

But all of that changed when Henry met a dog named Ashley.

It was a few months after Henry’s beloved black lab, Layla, had passed away that he decided to rescue a new companion.

“So I walk past the kennels, I see her, she comes to the gate. But she’s not a lab, so I continue walking. None of the other dogs came to the gate. I went through a second time, there she is, waiting at the gate.”

Henry could not resist the adorable girl who obviously had a thing for him, and so he adopted the one-year-old boxer and pit bull mix, named Ashley Monroe, that same day.

After about six months, Henry noticed that when he began raising his voice or losing his temper, Ashley would gently take his hand in her mouth or rub up against him. She would even climb into his lap if he was seated.

Henry added that Ashley had been braving the family cat – “the bedroom is Emmy’s domain” – in her dedication to soothing the effects of his nightmares.

He decided to contact Dave Rafus at 1 Veteran Foundation, a Southern Arizona nonprofit which provides service dogs to veterans dealing with PTSD. Henry completed the required paperwork, obtained his doctor’s approval, and then Ashley was sent off to school for her PTSD service dog training.

Henry missed Ashley terribly while she was away at training. Fortunately for the pair, Ashley graduated from the eight-week program in just five weeks.

“She was away from me over Thanksgiving and I got her back just in time for Christmas!”

Despite her refusal to climb the dreaded open-backed stairs, Ashley passed her Service Dog Certification test with flying colors. The most challenging part of the test for many dogs is, of course, the food. However, that was no problem for Ashley.

“They take a hotdog piece and put it about four feet in front of her. She looked at it one time, then put her head back down. Fifteen minutes later, I told her she could have it.”

For the last three years, Henry has worked as a pre-need funeral advisor for Service Corps International, the largest funeral home provider in the United States, Canada, and Puerto Rico. He helps people make arrangements before the fact and he sells cemetery property. And thanks to Henry and Ashley, SCI now has a Standard Operating Procedure for service dogs in the company.

Prior to having Ashley as a service dog, Henry’s PTSD had kept him from company functions, such as the Awards Night.

When Henry and Ashley attended the company Awards Night together in California, little did they know a surprise awaited them.

“After all the dignitaries were announced, they said, ‘We have a special guest. Where is Ashley Monroe?’ So we had to strut up to the front, and Mike Ross, my boss, danced with her!”

I asked Henry about Ashley having her own last name “Monroe” – where did it come from?

Ashley will be three years old in October. Henry beams as he tells me the two of them are just getting started.

Cover Story: How Green Is Your Valley? For The Animals at The Animal League of Green Valley the Grass is Greener