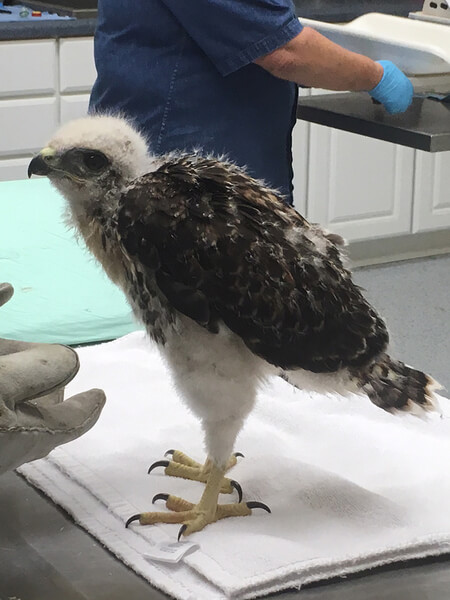 A Haven for the Wild: Tucson Wildlife Center

Summer in the Sonoran Desert sees soaring temperatures, along with an influx of wild baby animals, but as cities grow and stretch further into rural areas, humans and wild animals are vying for space. Most people have the best intentions when the inevitable interaction between civilization and the wild occurs, but often times, those good intentions end in tragedy. People assume that a baby Cooper’s hawk on the ground below their Aleppo pine, for example, is imperiled, bring it in the house, and separate it from its family and the important fledging process it was in fact working through.

The moral of the story? When in doubt, leave them alone. Mother Nature generally has a better idea of what’s going on than we do. That said, there are times when intervention is necessary. When a Tucson area animal is obviously injured, sick, or orphaned, they have a refuge available at the Tucson Wildlife Center.

In 1998 Lisa Bates and Peter Lininger established the center and obtained 501(c)3 status in 2000. Since then, they have been committed to Tucson’s wildlife 24/7, offering a help hotline, capture and transport service, veterinary emergency room, volunteer on-call veterinarians, and rehabilitation, release, and education for the community. The Tucson Wildlife Center’s impressive facilities consist of the full service, state-of-the-art Sam Goldman Wildlife Hospital, various indoor and outdoor recovery and rehabilitation areas, and areas for long-term residents who cannot survive on their own in the wild.

The number of animals that come through the center is staggering. They see nearly 3,500 wild birds and mammals per year. On a Saturday morning, The Tucson Dog caught up with Director Kim Matas, Animal Care Supervisor Lou Rae Whitehead, and Animal Care Specialist Allison Huber, to learn more about the Tucson Wildlife Center. In the hospital, a variety of animals awaited care or convalesced, under the watchful eye of Whitehead, who bustled between them, bottle feeding an orphaned ground squirrel, weighing a baby night heron, and assessing the newly arrived curve-billed thrasher who crashed into someone’s window. A red-tailed hawk who was orphaned when its mother was electrocuted by power lines comes in for a checkup, and someone brings in yet another fuzzy batch of Gamble’s quail chicks, and this isn’t even a particularly busy day, Whitehead explains.

In rooms down the hall a pair of bobcat kittens, an orphaned javelina, and two separate coyote pups are housed. Whitehead points at the coyote pup Orphaned red-tailed hawk Outdoor flight rehabilitation encloursure cowering behind her crate. “This is how they’re supposed to act,” she says. The other pup is jumping up on the sides of his enclosure and wagging his tail, obviously somewhat habituated to humans, and has a swollen head caused by hydrocephalus. For these two reasons, he will probably never successfully be reintroduced into the wild.

There are many reasons animals find themselves at the wildlife center, most of them involving humans, and the extensions of our lives. Domestic pets are the most common culprit, according to Huber. Window strikes also occur regularly, as well as collisions with cars, injuries from traps, pesticide poisoning, and abuse and cruelty. Tree trimming during the peak desert baby season of April through June can be disastrous for nestlings. Even contaminated water sources and hummingbird feeders can take their toll on wildlife.

A protozoan called Trichomonas, sometimes harbored in backyard ponds, pools, or birdbaths, is consumed by doves and pigeons who act as vectors. When hawk parents feed their tainted meat to their chicks, the babies form mouth legions and are unable to swallow, often leading to death. Many people are also unaware of the dangers their hummingbird feeders can pose. The formula can go bad very quickly, especially in the warmer months, causing the birds’ tongues to swell, and also leading to death if untreated.

Many of these sad fates are avoidable, however, if we as humans do our part to be responsible wildlife stewards. Simply cleaning out water sources in our yards regularly, and cleaning and replacing hummingbird feeder formula can save lives. Keeping cats indoors or building a “catio” is a great way to protect your cat, as well as protecting wild critters from them. If you’re thinking of trimming a tree, consider doing it during the winter months. It’s both better for the tree, and for the nestlings who will take up residence in the spring and summer. Finally, of course, under most circumstances, leave babies alone. If they look abandoned, chances are they’re probably not. Most parents will stay away until humans have left the scene, not wanting to draw more attention to their young.

In addition to all of these easy ways to keep from causing harm to wildlife, people should consider volunteering with the Tucson Wildlife Center. In the summer they need 180 volunteers to keep up with the high volume of animals. Monetary donations are extremely important as well, as the center’s funding comes solely from the public. They have a wish list including: copier paper, grocery store gift cards, tissues, paper towels, large plastic totes, blankets, pillowcases, exam gloves, chicken thighs, produce, and many other items. A full list can be found on their website: www.tucsonwildlife.com. To contact the center, or to report an injured, sick, or orphaned animal, call: (520) 290-9453.