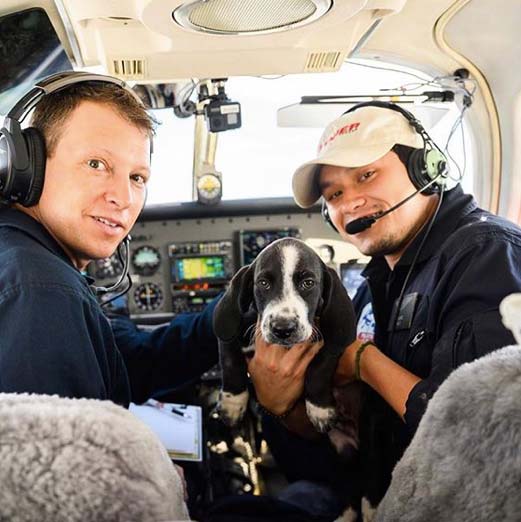 Story by Bella Wexler, Photos by “The Dogist”

None have the privilege of choosing the circumstances into which they are born. Oftentimes, animals bear the brunt end of this reality, especially when they are born with severe medical conditions or are being housed in an overcrowded shelter. The powerlessness of such animals and the people desperately trying to provide for them with limited resources inspired Michael Schneider to found Pilots to the Rescue. Since its inception in 2015, Pilots to the Rescue has expanded its reach as a 501c3 nonprofit organization dedicated to the transportation of animals in need to shelter locations and adopters who can sustain their care. Many innocent animals are born into unfortunate situations. But, thanks to Pilots to the Rescue, these furry friends are getting a second chance at the lives they deserve.

Pilots to the Rescue became a reality when Michael’s dream was quite literally given wings. Michael has always devoted himself to volunteerism. As a father of three, he places a heavy commitment on family, including family pets. He took action merging his “love for aviation and animals” upon learning about the life and death battle many pets face in overcrowded shelters. Pilots to the Rescue owns and operates its own plane based in New Jersey with Michael as the chief pilot (although he prefers the title “Top Dog”) along with many other pilot volunteers. The nonprofit occasionally connects with private planes who are willing to transport pets on their return flights, too. On average, Pilots to the Rescue conducts weekly to monthly flights of 10-20 pets. The entire process involves establishing relationships with the origin and destination shelters as well as coordinating with ground volunteers to have pets dropped off at the airplane site and picked up by destination shelter staff. Sometimes, ground transport volunteers are tasked with driving pets long distances. Their willingness to go the extra mile makes these volunteers “the real heroes,” according to Michael.

Of course, Michael extends this humble gratitude towards all the people who have made Pilots to the Rescue possible, even when they have to improvise. The logistics can get particularly tricky when the nonprofit’s plane requires maintenance. At one point, an alternator failure resulted in a moving van being required to drive the plane and its precious cargo of pets for ten hours until they arrived at the drop off location. After that trip, Michael and some other volunteers arrived home after 4:00 am. This is the level of dedication that Pilots to the Rescue devotes to the animals it helps. This is also why the Pilots to the Rescue mission relies so heavily on volunteers and donations. No one, including Michael, profits from the time and energy put into Pilots to the Rescue. It is a labor of love fueled by generosity.

Although the majority of Pilots to the Rescue’s current flights are between New Jersey and North Carolina or other east coast locations, Michael is always looking for volunteers nationwide to help spread awareness and “expand our reach”. Especially important are transport coordinators who work remotely by communicating with shelters and volunteer pilots to organize transportation plans. “They really help us connect the dots,” says Michael. If you are interested in donating to the Pilots to the Rescue cause or signing up to volunteer, please visit their program website at www.pilotstotherescue.org.

Flying animals back and forth also lends an excellent opportunity to make friends, mostly of the four-legged variety. Pilots to the Rescue has transported cats, dogs and even a red wolf before. Jack the wolf was a member of a severely endangered species that finally began to rebound in population after Pilots to the Rescue transported Jack to a conservation facility. Besides this story, Michael says he’s felt very impacted by the disabled pets he’s flown. This includes one-eyed animals and a dog with cerebral palsy. It is also heartening to see how families light up when they are united with the perfect pet. After Pilots to the Rescue transported a basset hound puppy named Truitt to his forever home in New Jersey, his family started an Instagram page to document the rescue pup’s life. Thanks to Pilots to the Rescue, Truitt got a home for the holidays and his human parents found the perfect canine companion.

Undeniably, our world is facing some difficult times. “This pandemic shifts our priorities,” comments Michael. “Health, family, and love become our top interests which brings family pets to mind.” The unconditional love of pets reminds us that, even when the ways of life to which we are accustomed come crashing down, “your pets will always be there for you”. In times like these more than ever, Michael and everyone else at Pilots to the Rescue encourage people to really think about how they can support a cause which inspires them. There are unique ways to connect your passions and volunteering to better the lives of people and animals in need, claims Michael. “You just have to go for it”.