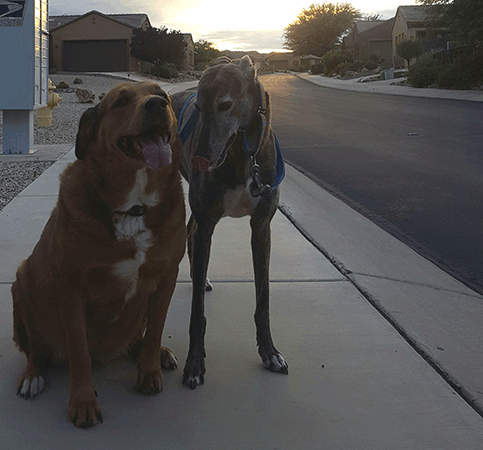 Anyone who has rescued a companion animal will probably tell you that it’s not a one-way street. So often that rescued animal turns around and rescues us. Jennifer Howard and Steven Wolf each experienced this when they rescued their first Greyhounds in vastly different places and situations. They never could have known the future implications, and how it would eventually bring them together, under the most fateful, or perhaps karmic, of circumstances.

Before they found each other, Howard and Wolf both endured and overcame many struggles. Born and raised in Pennsylvania, Howard experienced more than her share of trials, surviving everything from mysterious liver failure at the impossibly young age of 20, to Hepatitis C from blood transfusions at age 30, and open-heart surgery at 40. One of the things that got her through the tough times was art. A self-taught artist, she found much of her inspiration in southwest imagery. In the late 90’s, another source of inspiration struck. After learning of the often tragic and disturbing fate of racing Greyhounds, she became determined to rescue one herself. In the spring of 1998, she adopted Aiko, fresh off the track, through a rescue dedicated to ex-racing Greyhounds. This ignited Howard’s passion for Greyhounds, and changed the course of her life.

At another time and place, Steven Wolf faced his own formidable struggles. A debilitating spinal condition had forced the attorney into early retirement, and also prompted a move from Omaha, Nebraska to the more forgiving climate of Sedona, Arizona. Around this time, on the now-defunct Tucson racetrack, a Greyhound was found abandoned. She was taken to Cottonwood and named Comet. In Cottonwood, Steven met and adopted this first Greyhound. Comet was wary and timid at first, but with love and consistency, Wolf taught her to trust again. Wolf saved her; she soon repaid his kindness.

Meanwhile, back in Pennsylvania, Howard decided to end her unhappy marriage, and finally realize her dream of moving to the southwest. In 2012, she pulled up stakes, coming to Tucson for a fresh start. The blessing-in-disguise of unemployment prompted Howard to radically shift gears. Knowing she had valuable artistic skills, it was just a matter of marketing. Since becoming inspired by Greyhounds, much of her art shifted in that direction. Using social media, she attempted to “friend” anyone who featured a Greyhound in their profile, thus building her client base. This also sparked another unforeseen opportunity.

One day in Sedona, Comet wanted to go for a walk. Wolf had already started training her as a service dog. By chance, they met some neighbors who knew of a surgeon that could help him. He thought it was a long shot but went for it. Now, after surgery and decade of therapy, he can do many things he never thought he would again. He still needs help with certain things. These are all things he has trained Comet to do for him, making her the very first Greyhound service animal. She was so impactful in his life that he wrote and published a memoir of their story, Comet’s Tale: How the Dog I Saved Saved Me.

In Tucson, Howard’s business was doing well. She was donating and selling her Greyhound and other animal-themed art to different groups at wholesale prices, thus enabling both to benefit. While happily working on her art, she noticed one of her hundreds of new Greyhound social media friends repeatedly popping up on her news feed. He seemed to be going through a hard time due to a rough divorce. Howard could empathize with his situation, and she was considering reaching out when she was surprised by one of his photographs. It featured a prominent geological formation, known as Elephant Head, which can be seen from interstate 10 near Green Valley, Arizona.

The location was just too much of a coincidence for Howard. She contacted the man, Steven Wolf, just to meet as friends. When they met, however, something instantly clicked between them. They both fought their way through horrible medical situations, and won against all odds. They shared a similarly goofy sense of humor, and so many interests such as art, the outdoors, horses, and of course, Greyhounds.

Howard’s current dog Jovie, a rescue from PACC, gets along famously with Wolf’s current Greyhound, Piper. Initially they were concerned about how Piper would do with Howard’s two cats, given the breed’s tendency to chase, but even the animals got along just fine. Howard and Wolf believe this was all meant to be, a fateful series of events where, if just the slightest thing would have been different, they might never have met. Luckily, the stars lined up just right for these soul mates. They are currently seeking another rescue Greyhound to join their happily ever after.

You can check out Howard’s art at: https://www.pinterest.com/jenhoward7547/

Out of the Ruff for Goldens Charity Tournament – March 16