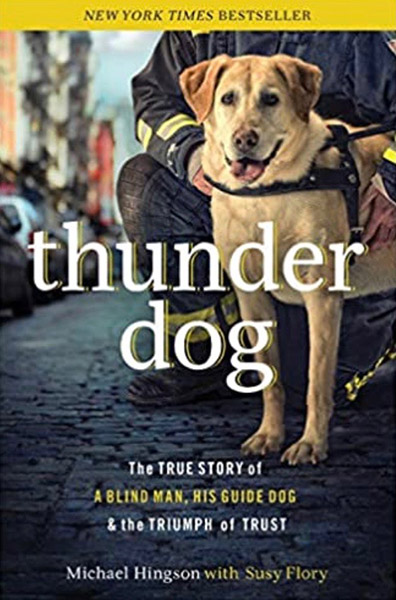 Michael Hingson and his partner Roselle rode the train into New York City that day. Admittedly, the night before was a bit rough. A thunderstorm decided to camp out over their home. Roselle hated storms – they made her nervous. The pair worked together in the North Tower. It was September 11, 2001.

Michael recently spoke at the Humane Society of Southern Arizona’s Rescue Me fundraiser.

Michael is blind. Roselle was his guide dog.

Michael was printing documents when the building lurched, and he heard a muffled explosion. He went and stood in the doorway, his co-worker David was clinging to his desk, and Roselle was asleep under it. “David and I said goodbye to each other because we thought we were about to take a 78-floor plunge to the street,” Michael recalled. When the tower was erect again, he went straight over to Roselle, now coming out from under his desk, and gave the command “heel,” prompting her to his left side, which she did.

“At about that time, the building dropped down about six feet,” Michael said. “David was frantically shouting, ‘Oh my god, Mike, there’s fire and smoke above us. There’s millions of pieces of burning paper falling outside the windows. We’ve got to get out of here right now. The building is on fire. We have to get out of here!’” Roselle reportedly was yawning and wagging her tail, and Michael calmly said, “Slow down, David.” “And then he used the big line, as I call it, ‘You don’t understand. You can’t see it!’” Michael said.

But Michael related that the problem wasn’t what he couldn’t see, but rather what David couldn’t see.

He was 4 months old when it was discovered that he was blind due to a condition called retinopathy of prematurity. “The doctors told my parents to put me in a home because no blind child could ever grow up to amount to anything,” Michael said. In the 1950s, most blind children were extremely sheltered.

Instead, Michael spent his first five years like any other kid of that era. He walked around his neighborhood and went to the candy store daily to buy pretzels with pennies. “I didn’t even think about being blind, although I knew I wasn’t exactly the same as all the other people,” Michael said.

He was 14 when he got his first guide dog Squire, a golden. They worked together for nine years. When Michael graduated with his physics degree, the chancellor gave Squire a degree in Lethargic Guidance. The canine grad worked one more year before retiring with Michael’s parents.

Michael grew up with dogs — a dachshund named Rudy, then a mini dachsie Peewee.

“Dogs like to know the rules. I think that’s the most important thing that we can do with our dogs. I think that dogs want to be treated as part of the team. They feel that they’re pleasing you by obeying. One of the keys to team relationships is accountability. Treat dogs like part of the team, as part of the family. Pay attention to them, encourage them, and hold them accountable,” Michael said. But it goes both ways, notes the best-selling author of Thunder Dog.

Roselle was part of the team. She knew the rules, and the pair were experts navigating in the dark. When a firefighter nearly insisted on helping Michael out of the building, David convinced him that he was ok. The firefighter leaned down to Roselle – taboo etiquette for interacting with a working guide dog, but Michael didn’t mind this time. Roselle licked his face. Michael knew it might be the last act of unconditional love the hero might receive.

Fortunately, Michael’s parents didn’t take the sheltered approach. Instead, they opted for the unconditional approach.

And fortunately for those with him on 9/11. Michael’s calm presence, unmatched wit, and charming sense of humor traveled with him as they descended step by step. In many ways, Michael had prepared for this. He’d taught himself the Trade Center’s complex, prepared for an emergency, and developed a “mindset” needed to help people focus. Teamed with his pilot Roselle, Michael navigated through obstacles and forged a path out of the North Tower to safety. 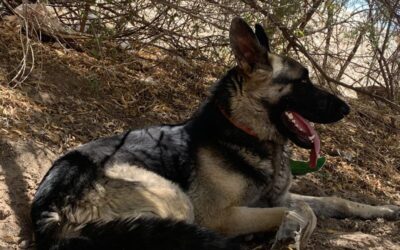 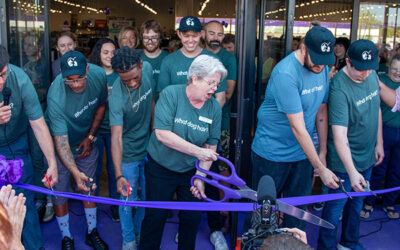 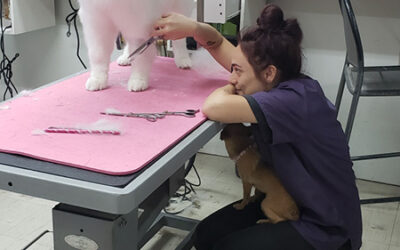 Training: Preparing for Veterinary Visits, Grooming and other Stressful Outings