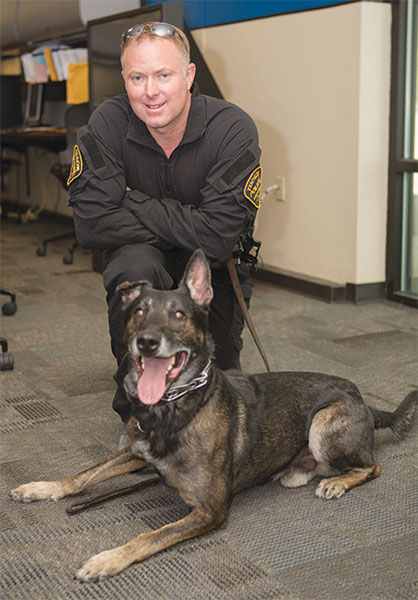 Many of us have seen Tucson Police Officers driving the streets of our city, and protecting and serving the public in many ways. When you see these officers, you probably do not think about our four-legged protectors as well. These are the members of the Tucson Police Department K9 unit.

The dogs who are part of the TPD canine unit are friends, partners, and sometimes the last line of protection for our officers who serve in the department. Currently there are nine teams of dogs and officers, with another two dogs possibly joining the force at the end of the month.

Choosing a dog is a rigorous process. The officers make trips out to California, and the dogs are put through a complicated selection process which typically takes about four hours from start to finish. The first thing the officers look at is how friendly the dog is. They do not want a dog that is too aggressive because it may be more difficult to call off the dog while working. Secondly, the officers look at the play drive of the dogs. Lastly, they are tested in their courage. Once the dogs are selected, they are brought back to Tucson and put through a series of training and testing. Environmental factors such as stairs and slick floors are part of the testing, and the dogs are also checked to see how they will react to sounds such as gunfire.

Each dog costs approximately $10,600 after taxes. They are usually breeds that include Belgian Malanois, Dutch shepherds, and German shepherds. The age range of each K9 officer that begins the program is anywhere between eighteen months and three years. Their training time is typically between twelve to fourteen weeks. Once the training is complete, each dog is equipped with a bullet proof vest, and they hit the streets with their partners. After their time in service, which usually lasts until eight years of age, the K9 officers are retired and offered for adoption to their handler at just one dollar.

Sergeant Brad Pelton took command of the TPD Canine Unit about five years ago. Along with his partner Borus, a Belgian Malanois, they have been protecting the citizens of Tucson ever since. Not only do these canine officers help support TPD and the Pima County Sheriff, but they also assist SWAT, the DEA, and other law enforcement agencies that may require their special services. Each dog in the department is dual-trained. They work closely with their officers to locate and take down perpetrators while on patrol, and are also very capable when it comes to drug location.

Each dog goes home after their shift to live with their officer partners. Fortunately, the Tucson Police Foundation has funding to help provide food, toys, and other goods for the dogs so that their handlers are not forced to pay for all their expenses. In speaking with Sgt. Pelton, we learned that each dog goes through approximately one fifty-pound bag of food per month.

A typical shift consists of ten hours, four days a week. The officers have one hour during their shift to care for, feed, and water the dogs. There is usually half of the department on shift at a time. Weekly training sessions with the dogs are held on Wednesdays at different locations throughout the city. This helps the dogs and officers stay sharp with their skills, and possibly learn new skills along the way. Officers also participate in the K9 Walk with their four legged partners in the spring.

The K9 officers are well cared for. Annual health checks and vaccinations are done at Valley Animal Hospital with Dr. Vagnetti and his caring staff. Safety for the K9 officers is an extremely important aspect of the job. Not only are they provided with bullet proof vests and top of the line training, but other measures have been taken to ensure that they are as safe as possible. The backs of the patrol vehicles have been modified to make the environment more comfortable for the dogs. The rear seats have been removed to allow for more room, and bowls are mounted inside the vehicles to provide food and water. Screens are mounted on the inside of the rear windows so that officers can allow fresh air into the vehicle without worry of the dog jumping out. This past year, the Tucson Police Foundation also provided funding to allow for heat sensors to be installed in each one of the patrol cars. An app can then be downloaded onto the officers’ phones, and when the inside temperature of the vehicle gets over 78 degrees, an alarm with sound on their phone alerting them to the rising temperature.

So, next time you are out and about in the city and see one of these selfless teams, think about what it is they do and the danger involved in protecting the citizens of the city. You may never need the services of the TPD K9 unit, but if you ever do you can rest assured that you are in the best of hands.