Special Feature: The Rescued Critters Food Drive: Making a Difference for Animals… One Door at a Time 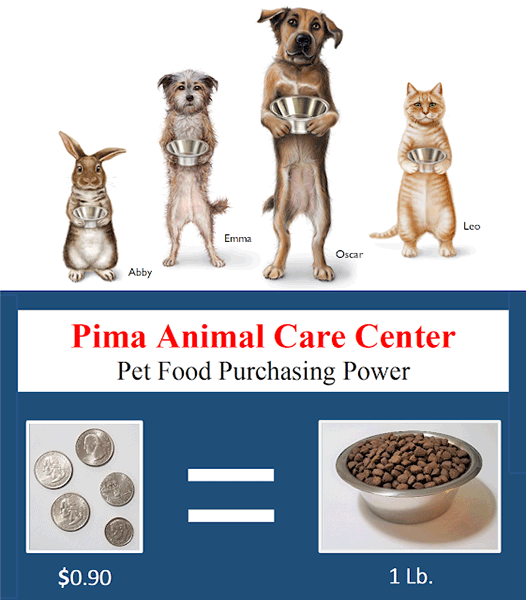 The Rescued Critters Food Drive aims to raise 2.2 tons of food for PACC in its first year… and it’s way ahead of schedule.

When one of his neighbor’s sons decided he wanted to take on an entrepreneurial project to get more trees planted in the Miles Neighborhood, Peter Norback offered to take him around and introduce him to all the neighbors.

“My neighbor said her son is a big risk taker; he gets on a bike and weaves in and out of traffic,” Norback said. “My risk is walking up and saying ‘Hi, neighbor.’”

Norback is well-versed in knocking on his neighbor’s doors. Every Sunday, he goes around the neighborhood collecting cash, food and other donations for the Pima Animal Care Center for a project he calls the Rescued Critters Food Drive.

His community service work in the Miles Neighborhood started years ago, when he started a program called One Can a Week to collect food donations from his neighbors in 2009. He was methodical in how he did it, and not afraid to start slow: He’d go door-to-door several days a week collecting donations and then hand-delivering them for the Community Food Bank of Southern Arizona. He helped donate more than 150,000 lbs. of food and $34,000 in total.

After several years, it got to be more work than it was before, because he found people were starting to care less and less about other people. Then he had an appendectomy at age 74. He needed a break. But once Norback, now 77, recovered, he decided he wanted to do something else to make a difference, and put together the Rescued Critters Food Drive in September 2018.

“I went back to all my neighbors and they all started to participate every Sunday, because it’s animals, and they love animals,” he said.

PACC can buy dog food for 90 cents/lb., so Norback encourages his neighbors to consider the purchasing power of even a small donation. He even stresses the impact the spare change lying on a dresser can have. Norback’s blog details a story about when one man down the street seemed self-conscious about only offering a dollar to the drive. Norback assured him it would feed a lot of little dogs.

Norback set a goal of raising funds for 2.2 tons of food in their first year. He thought if he could get 75 participants to donate just one dollar a week, they’d raise $3,900 in a year—which amounts to 2.2 tons of dog food. He has about 55 households that participate, though the number fluctuates. And he finds most people give more than one dollar—he often gets donations of $10 or $15. He’s also gotten donations of materials ranging from dog pens to leashes to a printer, which PACC now uses in its office.

He keeps careful track of every donation he gets, totaling the amount of cash and checks and weighing the food donations, making sure the receipts he gets from PACC match. He posts the totals to his website and emails them to his neighbors each week, and also emails and hands out a quarterly report of the amount raised.

“He’s a great community leader who’s been out doing extraordinary events,” said Richard Fimbres, the vice mayor of the City of Tucson and Norback’s neighbor, who donates to the drive each week. “He knows everyone in our neighborhood. He’s a great citizen and a great community advocate. He does a lot. He gives a lot.”

Norback pairs his small asks with big dreams. In fact, he believes they go hand-in-hand. When he asked Bennett Simonsen, his contact and the animal protection supervisor at PACC, how much dog food the shelter purchases a year, Simonsen said close to 100 tons. Far from fazed, Norback wrote in his blog that all it would take is 50 neighborhoods trying to meet the same goal the Miles Neighborhood is working toward.

“They’re doing what they like, planting flowers, and everybody’s happier,” he said, “So they give me more money, and I can give it to PACC.”

At the beginning of April, he sent out the results of the program’s second quarter—at 3,396 pounds of food (including cash donations assuming PACC’s rate of 90 cents per pound), the food drive was nearly 80% of the way to its goal, with 22 weeks left to go.

For more information about the Rescued Critters Food Drive, including information on how to start a similar project in your own neighborhood, visit rescuedcritttersfooddrive.blogspot.com.