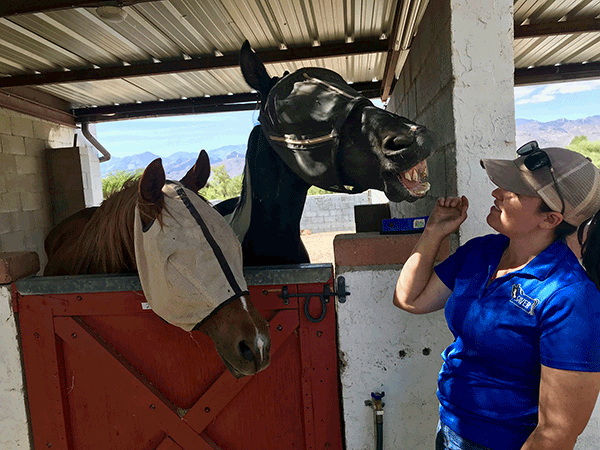 Story and Photos by Colleen Keefe

Dr. Michael Hutchison has worked with rescues his entire career. As the owner of Pegasus Veterinary Center he was concerned that existing equine rescues tend to spend most of their time fundraising. Dr. H, as he is affectionately called by his staff and patients, wanted to spend that time with the horses that desperately needed his help.

While working for other rescues, his most important jobs were emergency visits or to euthanize. In both cases, it was because there wasn’t vet care prior to the emergent event. It seemed obvious to Dr. H, who has been in practice since 1993, that a vet needs to be involved from the beginning of the care process.

SAVER (Southern Arizona Veterinary Equine Rescue) receives its horses from three major sources:
Government agencies such as the Department of Agriculture, Sherriff’s
Department, or The Animal Cruelty Task Force
Referrals from veterinarians of owners that had wanted to euthanize
Owners that want to euthanize

What sets SAVER apart from any other equine rescue in the country is that it is located onsite at the veterinarian’s office. The grounds include stables, a tack room and a training arena. Aside from the benefit of readily available medical services, the arrangement allows for the horse to receive most, if not all of its care in one place. The whole health approach encourages manageable, lasting results.

“Our goal is very different than most rescues. The most important motto that we have are the three R’s – Rescue, Rehabilitate and Re-home. And the re-home part, that’s how we make it work,” Dr. H said. SAVER has re-homed eleven horses so far. The goal is to rehabilitate within a month, but some horses need more time. Unlike a sanctuary where the animals stay as long as possible, SAVER’s goal is to get the horses into a forever home as soon as possible.

It’s in his practice where he found his volunteer/board members. “The vet practice helps to pay all of our salaries and then we use our free time to work with the horses,” Dr. H said.

Allie De Pagter, office manager at Pegasus is the rescue manager for SAVER. She handles the day to day needs of the horses like feeding, cleaning and nutrition. She’s responsible for coming up with plans for the rescues as they come in. De Pagter has a background in wildlife rescue. De Pagter said it’s most rewarding when horses “come in looking awful or they have behavioral issues and are able to work through that and get to the root of the problem and fix it. We send them home with somebody who really understands and appreciates them.”

To help pay for expenses like medical procedures and vaccines, lectures are done around town, rehabilitated horses are sold for a reasonable fee and the euthanasia fee instead becomes the adoption fee. Donations are also collected.

“Let’s say that somebody wants to give us a horse to help. We ask that they pay the cost of the euthanasia – [now] the adoption fee of $300. Then we take the horse and we vaccinate them, we float their teeth, do whatever else needs to be done to get them so that they can be re-homed,” Dr. H said.

“A good home is a big concern – it’s their willingness to provide a good home, provide love, provide care, clean after them,” Dr. H said. Every horse that is adopted out by SAVER is checked at its new home after one month, six months and one year before ownership is signed over. At those visits Dr. H checks the horse’s weight and basic standards and measures of care to ensure that the placement is a safe and healthy fit. “It’s not insistent that they use us as a veterinarian, it’s just insistent that they have veterinarian care, that they have had vaccines, that they have had care within that year, that they have demonstrated ability to care for them,” Dr. H said.

The first official adoption for SAVER was January 2018. Dr. H recalls that the process happened “organically”. The owners were going to euthanize her because she was potentially aggressive with their child who rode her. Instead, the horse went through the three R’s. SAVER re-named her Java because she was a little hot. Java needed a bit more care, so after two to three months, she was sent to a trainer. It was there that she found her forever family and was subsequently adopted.

“Sometimes it takes a lot for people to donate horses. For them to let them go means ‘I wasn’t a perfect person.’ There are some that insist that they [the horses] be euthanized. Because if they are euthanized, it means that the horse was so bad that nobody else could fix them, that they were the best home that the horse ever had,” Dr. H explained.

“It is a selfless act to for these people to be able to give them up. This is why the anonymity part is so important. I have a lot of respect for the people who are strong enough to do it,” Dr. H said.

For more information or if you would like to donate or volunteer, go to: www.SAVER-org.com

You can find SAVER on Facebook at Southern Arizona Veterinary Equine