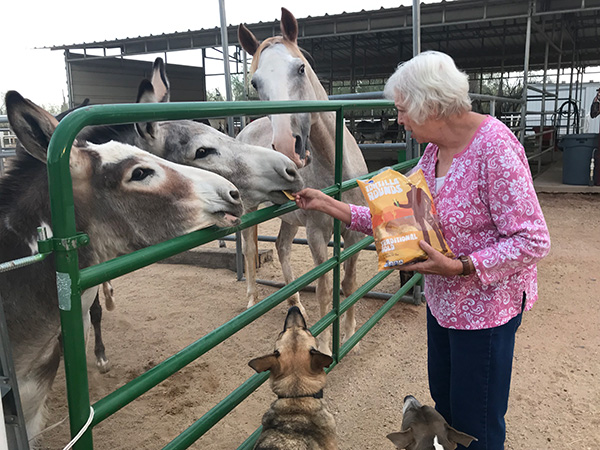 Story and Photos by Colleen Keefe

For centuries donkeys have been given a bad rap.

Sandy Amy, executive director of Zen Donkey Sanctuary wants the public to know the truth behind these unfair misconceptions. Amy has devoted the better part of her adult life to the gentle creatures. She’s had an affinity for animal welfare for as long as she knew what it meant.

“Our mission is to provide compassionate care to abandoned, neglected, sick, injured, at-risk -all the above – donkeys by making sure that they have a safe, loving and nurturing environment for their healing and restoration,” she said. The sanctuary’s goal is to rescue, rehabilitate, and rehome the gentle creatures. The organization formerly known as Zen Donkey Rescue that began 25 years ago, recently reorganized as a non-profit sanctuary to make provisions for the ones who will never be able to be placed.

Although the sanctuary’s primary focus is donkeys, it accepts horses, mules, goats, potbelly pigs, waterfowl, and dogs – many of which have special needs. Zen Donkey Sanctuary is home, “whether they have two legs, four legs or even three legs,” Amy said.

Classical music gently greets you as you enter the grounds and is continually piped into the sanctuary providing a calm peaceful environment for its inhabitants. The sanctuary adheres to a strict code of ethics. “We don’t buy, we don’t sell, we don’t breed, we don’t trade. We try to adopt [out] when appropriate,” Amy explains. She estimates that 40-50% of the animals she and her staff care for can’t be re-homed, usually due to the magnitude of the injuries. “Maybe they walk funny, maybe they don’t look as pretty as others – the majority of the animals that come here have really sad stories.” Amy confessed.

Donkeys are very social animals and should always be kept in bonded pairs, as they form strong attachments to one another. Buddy was separated from his mom before weaning and was “passed around a bunch” before being put in with a horse. He had not seen another donkey since he was six weeks old, so he internalized who he thought he was. At the sanctuary “Buddy saw him [an Arabian horse named Stryder] and said, ‘That’s my brother from another mother.’ He chose his bonded partner. They’re kind of like Schwarzenegger and De Vito – they’re the exact same age. They’re twins,” said Ronnie Smith, who lives and works at the sanctuary.

Amy’s lifetime professional work was in human rehabilitation. “I’m retired now, but you’d never know it,” she joked. She uses her large reserve of treatment approaches such as acupuncture, laser therapy and electrical stimulation, in addition to traditional care for the animals. Amy’s husband who is an engineer, has created customized adaptive equipment like walkers and braces. He recently designed a sling for Annie, a baby goat with a spinal cord injury that rendered her unable to walk. Annie has just begun to put weight on her legs with the help of the device. The prospect of her walking again is now closer. “Any day you can wake up and take care of an animal that almost never had another morning is the best thing you can do with your life,” Smith added.

“For me the endearment and the love came when we adopted our first one about 40 years ago,” Amy recalled. They named their new bottle-fed baby Eeyore. “He totally changed my world – he changed my perspective on equines. They are extremely intelligent animals, reliable and dependable.”

It all began when the couple was living in New Mexico. They had several horses at the time. Amy spotted John Stiles, a nomadic herdsman and philosopher, pulling a donkey-driven wagon down Highway 14. She would follow the wagon tracks to find him, often bringing him homemade soup and bread, and feed for the animals. Stiles mentored Amy, teaching her how to live a simpler life – lessons she now lives by. The sanctuary and Amy’s on-site home operate like it was 100 years ago. It’s completely off the grid, self-sufficient and isolated. Stiles gifted Eeyore to thank her for her generosity and kindness.

“Donkeys are intelligent, personable, affectionate beings that can offer wonderful companionship. Anybody that spends a little time with them understands the charisma they possess. They’re incredible, loving, big, big dogs.” Amy explained. “They are such healing animals – it’s almost a secret.” Amy believes they can offer more therapeutic restoration in humans than even horses. “They’re just a mirror into our own soul if you really look,” she continued.

Now back to those misconceptions about donkeys:

“To me rescue is a lifestyle, it’s not a hobby, you live it, breathe it, love it 24/7,” Amy explained. “I don’t have the heart to turn them back after they have gone through so much trauma. There’s always room for one more,” Amy admits. “Animals are my life, they are my passion, my purpose. I’m a firm believer that animals really make us better people,” she concluded.