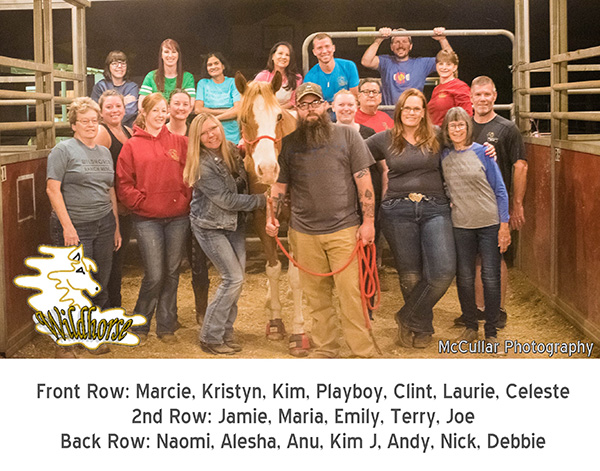 Inside the Grand Canyon, near Havasu Falls, hikers are shocked to find horses in dire conditions. The horses are clearly mistreated and forced to work in 100-degree weather. It is clear that they need help, but deep inside the canyon, there appears to be nobody nearby who can help.

On the other side of Arizona, in Sahuarita, wild horses that have roamed freely for generations are forcibly rounded up and taken to an auction, where they are sold to slaughter for meat. Pregnant mares with foals on their side are anxious and fight to get away. Fortunately, there are rescues working around the clock to save the horses in both of these situations.

Tucked in between looming new housing projects and gated communities, Wildhorse Ranch Rescue is a unique sanctuary that over 200 horses have called home. Nearly 100 years ago the land was Yellow Rose Ranch, where Clabber, saved from slaughter, became the 1941 World Champion Quarter Running Horse. Kimberly Meagher, founder of Wildhorse Ranch Rescue, found out about Clabber’s story 10 years after starting her rescue. “When I received a package in the mail from a family member related to the owners of The Yellow Rose, it gave me goosebumps to find out that a rescued horse lived at the ranch, was saved from slaughter and went on to become an world champion.” She believes his spirit has been behind her mission all along.

The rescue was founded in 1995 and received 501C status in 2000. In the 24 years the rescue has been operating, they have saved over 200 horses. However, their methods and approach go far beyond that of the typical rescue. Kimberly and her Wildhorse volunteers take in wild, domestic and retired horses in a variety of conditions.

Wildhorse makes frequent trips to the Supai, helping severely sick and injured horses hike the 8-mile trail out of the canyon and coordinating with the Humane Society of the United States to find them placement. Wildhorse created an additional program, HavasuPups in 2007, for unwanted stray dogs. Unlike other strays, however, the Supai strays learned to team-up with hikers to get food and water, so they are very socialized. The goal of the program is to remove most of the existing stray canyon dogs and secure them in forever homes. Since 2007, the HavasuPups program has reduced the unwanted dog population by 85% through spay and neuter programs as well as adoptions. Wildhorse also takes dog food, cat food, and hay for the animals during their trips.

No expense is too much to save the life of a horse at Wildhorse Ranch Rescue – they work with countless veterinarians for ongoing medical issues and provide tens of thousands of dollars’ worth of care to keep their horses alive. Each horse receives proper medical attention, food, training, grooming and love from the volunteers and the rescue. The rescue is a beacon of hope for the horses and mules rescued from Supai in the Grand Canyon, and a safe place to recuperate before finding their forever homes.

Wildhorse rescue also attends the auctions in Buckeye, AZ. To rescue horses from Sahuarita, fighting against the wrongful round up of the wild horses by preventing them from being sent to slaughter. Kimberly arrived at the most recent auction with her team a few minutes late and learned that a mother and her foal had already been sold to the auction. She knew that wild horses become pregnant quickly after giving birth, and that three lives were about to be unnecessarily destroyed. After her team, along with other Tucson-area rescues, saved the remaining horses, she approached the meat farmer. “When we were negotiating with him,” she said, “he wanted $500 for the pair. He had paid $150. A wonderful and kind coupled offered to pay the $500 so we made the deal and those lives were saved along with 22 other horses that we bid on and saved that day.” Kimberly was able to take them back to her rescue with the rest of the horses and slept better knowing that all of them were safe.

Kitty City, a cat rescue with open-air catio’s and atriums for the cats to roam around in comfort, also calls Wildhorse home. Celeste is the volunteer in charge of the cats and makes sure each new rescue receives veterinary care right away. Each cat has a unique name and lives a cage-free life in the sanctuary. Kitty City began as a way to save feral cats who were being killed in housing construction and other city development projects and has evolved into a sanctuary to care for each feline life while they wait to find their forever homes.

Volunteers keep the rescue operating and provide love and care to each and every horse and cat. Some volunteers have even adopted horses and keep them housed at the sanctuary to ensure they have enough space and a clean home. There are currently over 51 horses living at Wildhorse, and they have run out of room to take in more rescues. However, founder Kimberly has purchased 40 acres of land in Prescott to expand the rescue and is in need of donations to put up fencing and make the land habitable.

Visiting the rescue is worth the 90-minute drive from Tucson, AZ into beautiful Chandler and Gilbert. There is space to sit and have a cool drink in the shade while admiring the ranch. Sometimes, there will be horses rolling around in the dirt, or following the tours around the barn and friendly cats are eager for attention from visitors. Wildhorse also offers a cozy Airbnb, allowing visitors to rent out the space and experience life on a real ranch rescue.

Please email info@whrr.org to schedule a visit, donation, or if you are interested in volunteering or adopting. Phone: 1-866-926-8007 Website: http://www.wildhorseranchrescue.com/wildhorse.html.

Kitty Korner: We Save Kitties at Risk (WSKR)