Horsin’ Around: Therapeutic Ranch for Animals and Kids (TRAK) 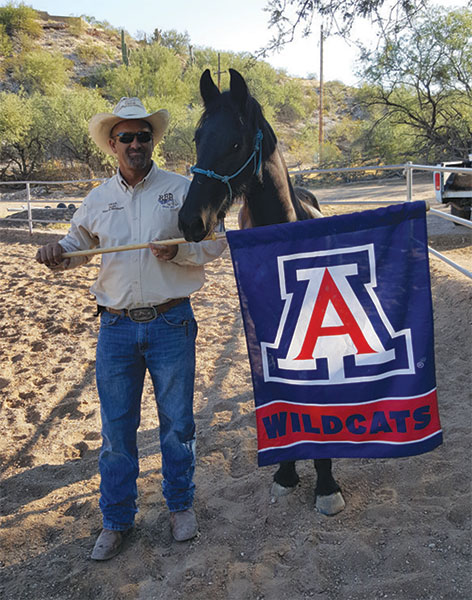 Story and Photo by Zach Fitzner

When I met Scott Tilley, executive director of TRAK, his passion for his work was as obvious as his work-hardened hands. TRAK has around 75 animals used to help kids; from wiener dogs and St. Bernards to rabbits, chickens and horses.

At the beginning of the economic down turn, Scott Tilley owned a horse boarding facility. With the recession Scott says, “There’s a reason they call it the sport of kings.” Horses are expensive and for many they became an impossible luxury. With hay prices as high as $20.00 a bale, some horses were even turned out into the desert.

Scott couldn’t see himself happily doing anything besides working with animals.

Scott’s wife Jill has a background in special education and had even previously used animals as a kind of therapy to help kids learn in Atlanta. Scott is quick to admit most of TRAK’s program ideas come from Jill.

Together husband and wife hatched the idea of TRAK, a 501(c)(3), non-profit with a bold mission statement: “Strengthening kids and community through animal interaction”.

Community is a huge part of TRAK. A retired judge donated the land TRAK currently occupies and Whole Foods donates approximately 200 lbs of fresh fruit and veggies daily for feed. Scott tells me that about 85% of the work done at TRAK comes from the 300 to 400 people who volunteer annually.

The hard work of the TRAK community greatly benefits kids. Parents ask Scott, “How do you do it?.” Kids that won’t clean up their rooms at home can be found shoveling horse dung at TRAK. “Kids just want to be here,” Scott explains. “It’s like fishing; you have to offer the right bait. We have the right bait.”

Scott sees a world where kids are losing their connection to others; other people as well as to animals. As technology infuses every aspect of our lives, face to face time is scarce; hands-on skills are rare. Kids need a real connection to the world around them and the animals offer just that. TRAK gives something that previous generations may have taken for granted: pride in physical work and interaction with animals that never judge.

Elaborating on the philosophy that drives TRAK, Scott explains how horses and other animals have a perfect empathy. “I think they can see right into your soul.” Then Scott told me the story of a mare used for Premarin production. Horses used to create Premarin have less than enviable lives. Horses are kept pregnant all the time and their foals are taken away immediately just to continue the process.

The mare was at the end of her time being useful for Premarin production and so she was taken to live at TRAK. With a lifetime of negative association, the mare was shy around humans. She was especially shy around men. During a therapy session, a small group of people sat in a circle within the mare’s pen. The people shared or just listened to others’ stories as they felt comfortable, just as the mare kept her distance or approached people as she felt comfortable. Towards the end of the session the mare did something she’d never really done before: she approached a woman sitting in the circle. The mare gently nuzzled the woman, and as the people in the circle started to leave, the woman broke into tears. With an animal, we don’t doubt the affection as we might with a person. The woman told Scott a story of a rough past and it was clear that she and the mare shared something transcending the gap between species. Scott tells me the horse has passed away from natural causes but sometimes he still sees the woman lingering by the fence just outside of TRAK, feeding the horses carrots. “I can’t explain it but that’s the real deal.”

TRAK helps other organizations in the community just as it receives help. Veterinarian and Animal Science students from various schools have opportunities to intern at TRAK and be fostered as the next generation of people helping animals. About nine behavioral health groups use TRAK for therapy. Several kids’ special needs groups visit regularly. Students from two high schools come to TRAK. As we walk through TRAK’s facilities, Scott tells me Boy Scouts also volunteer at TRAK.

The main thing about TRAK though, is of course the animals. We walked past pens of goats and sheep eating next to a sleeping pig. “That’s Wilbur, the other pigs are mean to him, so he hangs out with the goats and sheep.” We stop next to a pen of miniature ponies and Scott explains that the masks they wear are to keep out flies. In a chicken pen, small girls are gently caring for and handling small chickens. Scott explains that they once had larger chickens and a turkey but they intimidated the kids.

As I’m leaving TRAK, I watch a new batch of volunteers learning to handle horses and feel a twinge of envy. I know why kids want to be here. I linger near the front pasture, take a few departing snap shots and realize I don’t want to leave.

Feature Story: Barbara Bridges: A Champion for Dogs and Founder of K9 Heroes