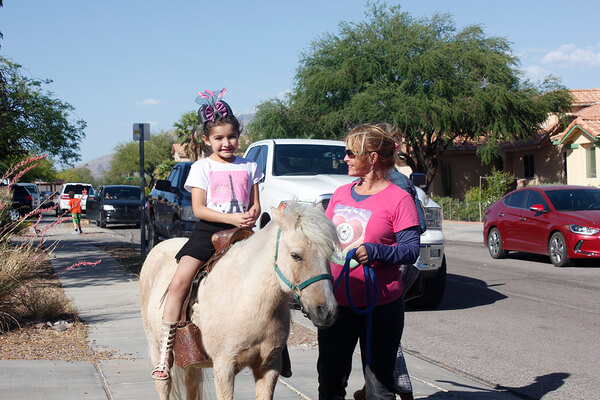 Story and Photo by Emily Dieckman

What could make the giggling, sillystringed, balloon-popping wonder of an eighth birthday party any better than it already is?

How about a pony?

When Nancie Roahrig, the president and founder of Step Up TLC (the TLC stands for “Therapeutic, Loving Caballos) and her 14-year-old granddaughter and volunteer for the day, Jamie Clement, rolled up to Alyssa Padias’ birthday party, several dozen kids lost it.

Cries of “It’s so cute!” “It’s so soft!” and “I wanna keep him!” abounded, before the kids even had the chance to touch him.

Roahrig didn’t waste any time. She and Clement were lifting children onto Dillon, the miniature pony, and giving them rides down the sidewalk in no time. The open mouthed, wide-eyed children struggled to form an orderly line in the face of such overpowering awe and desperation to make sure they got their turn.

As if it wasn’t enough to spread joy to children and love birds all over Tucson (The Clydesdale Division of Step Up TLC also pulls carriages for weddings), this is only half of what the nonprofit does. Its primary mission is bringing the organizations’ 13 horses (ranging from Shetlands to Arabians to miniature horses) into hospitals, rehabilitation units, nursing homes and in-patient units for the terminally ill, providing a little bit of cheer and a whole lot of cuteness to some of the people who can use animal therapy the most.

Roahrig started the organization back in 2006, after more than a decade of working as an in-home caregiver, and almost a decade of owning a horsedrawn carriage company with her first Clydesdale, Lenny. Her first experience with horses happened back when her daughter was a teenager.

“Then she met boys and learned how to drive a car, and I got left with the horses,” Roahrig laughs – the kind of laughter that’s packed full of cheer and gratitude.

A friend of Roahrig’s lost her daughter to Leukemia, and when she told Roahrig how much an animal visit would have improved the end of her daughter’s life, Roahrig started doing animal therapy in 2000. The very first time she went to a hospital, she stepped into the hospital with one Clydesdale, a ladder and a saddle. One of the kids she was visiting was a little boy who had been in a car accident with his mom. His mom hadn’t made it, and after some time in a coma, the little boy was conscious but completely unresponsive, despite the efforts of nurses, psychiatrists and social workers.

“So here’s this 2,000 pound horse, and they brought the little boy out in the wheelchair, and the little boy turned his head and stared at him,” Roahrig said. “That was the turning point of his healing.”

The kids at Alyssa’s birthday party aren’t in the hospital, but their squeals of delight and shining faces make it easy to see that animals have a universal sort of magic.

Stephanie Padias, the guest of honor’s mother, has invited Dillon and Nancie over before for her son’s first birthday party, and was happy to have them back. “I like what she does it for. I think all the money she makes goes toward what she does at the hospital, and she treats the horses well, and she’s good with the kids.”

Roahrig loves the work she does too. The story about the little boy and her beloved Clydesdale Lenny is just one of the “little miracles” she says she sees all the time in her work.

One young man—a husband and father—in hospice care, was in poor condition when Dillon first came to visit. But his spirits soared when he met Dillon.

When Roahrig and Dillon came back the following week, the man was sitting up in bed with the lights on, with more energy and happiness than his family had seen him have in weeks. He even asked a family member to buy a package of shortbread cookies from the vending machine downstairs, so he could feed Dillon. “Dillon rallied him, so it gave the family a whole other week to enjoy him,” Roahrig said.

Another time, Dillon and Roahrig visited a dying man who had spent much of his life around horses, and the man passed away shortly after they left the hospital room. “The man had grown up with horses, so his family felt like [Dillon] was a messenger, telling him it was okay to go,” Roahrig said. “They felt that Dillon was sort of the bridge between God and here.”

Roahrig visits hospitals and hospice centers around town three times a month, with birthdays and weddings sprinkled throughout to raise revenue. Her ebullience in the midst of a chaotic birthday party makes it clear that none of it feels like work to her. Then comes part two of the pony party: Roahrig and Clement pour out (nontoxic, of course) paint onto paper plates and hand out paintbrushes to the kids. It’s time to paint Dillon!

The kids take to the task with gusto, and Dillon’s canvas of hair (who’s protected by a strict “nowhere-near-the-face” rule, and under the watchful eye of Roahrig) transforms rapidly into a Pollockesque painting. “The pony’s lookin’ fabulous!” cries the birthday girl, leading a charge to give Dillon’s hooves a pedicure and stamping his side with handprints. She might not realize it, but by being a part of Step up TLC’s mission, she’s also leaving handprints on the hearts of people who need it most.

Cover Story: Stitching Together the Fabric of Dogpatch