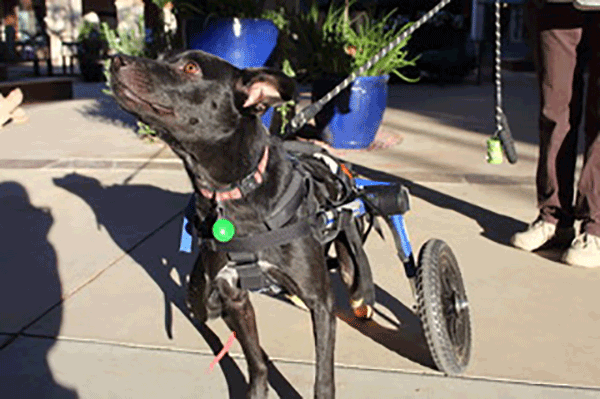 Gil, the black lab, is just like any other puppy; he loves to play with his Chihuahua housemate, chew up toys and slippers, and he can’t contain his excitement at the prospect of food. The only thing that distinguishes Gil from other dogs: He demonstrates this lively personality on two legs instead of four.

This pup is grateful for his current life, given the tragic alternative from which he was saved. In the spring of 2018, a local veterinarian in eastern Arizona found Gil with his back two legs injured. His severe injuries made the vet suspect that a car had hit him. Unable to find a rescue organization to accommodate Gil’s needs, she was afraid she would need to euthanize him. That was when Gil’s second heroes, Nancy Young Wright and Evelyn Lisenby-Karwoski came along. With the help of numerous other individuals and organizations, Nancy and Evelyn began working to give Gil his life back.

Nancy was introduced to Gil at the vet, and she couldn’t help but be charmed by the undying spirit embodied in the young pup. She facilitated Gil’s placement into Evelyn’s care as his foster during the week, with Kim Kelly providing care on weekends.

By teaming up with Backyard Barnyard and Lil Bit of Love (LBOL), these women have been able to give Gil a second chance at the life that was almost stolen from him so early on. Evelyn has been fostering Gil for almost six months. Upon arrival, she gave him four baths before finally revealing the grateful puppy under the layers of muck, which coated his fur. With the help of Nancy, Evelyn learned to properly care for Gil’s special needs. While it does take two sets of hands to fasten him in his doggy wheelchair, Gil needs no help taking off to explore from there!

Soon, Nancy and Evelyn took Gil to see a neuro-veterinarian. X-Rays of Gil revealed the truth about his injury. Gil wasn’t hit by a car. He was shot from pointblank range with a shotgun.

Because of the location of the buckshot in Gil’s spinal area, he probably didn’t feel the shots upon impact. Nonetheless, his back legs would have immediately given way beneath him. Gil’s caregivers were presented with two options: leave the bullets in Gil’s spine and Gil inevitably in a wheelchair, or scrape together the thousands of dollars required to get him surgery and a chance of walking on all fours again.

Inspired by Gil’s undying zest for life and agility despite his condition, Gil’s new family of helpers chose the second option. They decided to involve the Arizona community in funding the surgery, which could give Gil his legs back. Local farm sanctuary, Backyard Barnyard, helped raise $3,000 quickly for the initial procedure. Later on, Nancy and Evelyn established a GoFundMe page. They’ve held both rummage and bake sales, accepted donations at events like Dogtoberfest, and organized fundraisers such as PupNight throughout the holiday season. But Gil’s journey is an ongoing one, so they plan to continue fundraising in the future.

Since Gil’s surgery, Evelyn and Nancy have been dedicated to helping him through physical therapy, where he receives acupuncture and works to rebuild his muscles on an underwater treadmill. While it is highly unlikely that Gil will ever completely regain the usage of his back two legs, these treatments have increased the feeling he has in this paralyzed area. Now, you can see Gil kick his right leg and wag his tail ever so slightly when he hears a can of food being opened or sees a playmate nearby. Gil is a fighter, determined to beat the odds with his slow, yet continuous improvement.

This miraculous pup will be available for adoption when he finds a family capable of accommodating the unique needs associated with his disability, and one that can keep up with his energetic and adventurous personality. In the meantime, Gil is also looking for a relief foster family to help Evelyn and Kim. Accepting the responsibility of caring for Gil was, “a leap of faith from the beginning” Evelyn says. It takes a village to turn this leap of faith into a success story. Lil Bit of Love Rescue is helping to facilitate Gil’s placement into foster families and an eventual forever home.

Gil’s perseverance has taught everyone around him the importance of appreciating life and working together to make a difference in the lives of others. “He’s not done living yet,” says Evelyn. And certainly, our community isn’t done giving. 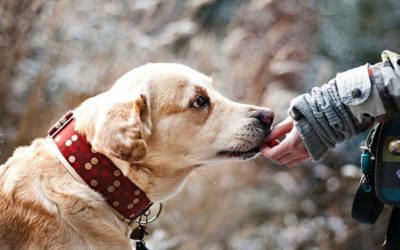 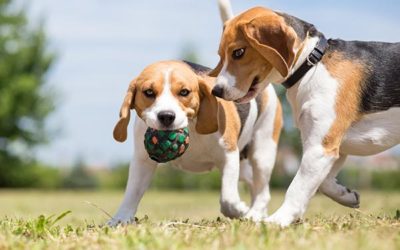 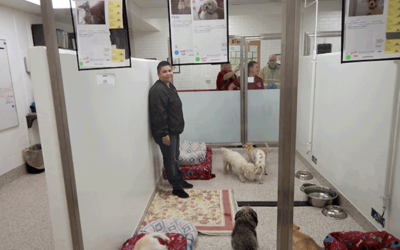